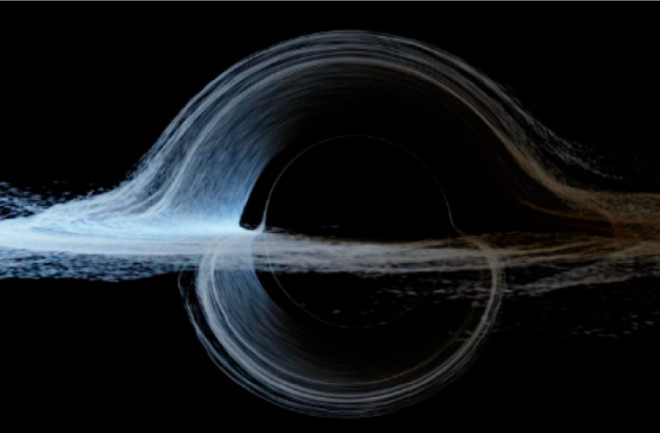 In the 2014 movie Interstellar, astronauts investigate planets orbiting a supermassive black hole as potential homes for human life. A supermassive black hole warps surrounding space-time, according to Einstein’s theory of general relativity, and at least one of the planets in the movie, called Miller’s planet, experienced time passing at a slowed-down rate. For each hour the astronauts spent on the planet, several years passed outside the black hole’s influence.

The time shifting would dramatically affect whether a planet near a supermassive black hole could support life, according to a new paper posted to the preprint server arXiv. General relativity’s time warp affects not only the passage of time, but also the kind of light reaching the planet, with implications for any life there.

Though the likelihood that a habitable planet would orbit a supermassive black hole is unclear, thought experiments like these are helpful for better understanding the universe, says the paper’s author, Jeremy Schnittman.

“It’s a little bit whimsical, it’s a little bit tongue-in-cheek,” says Schnittman, an astrophysicist at NASA’s Goddard Space Flight Center. “But it helps us think about the way the universe works. So even if there really is no such thing as a planet around a black hole, it’s still fun to think about.”

A New Kind of “Habitable Zone”

When astronomers think of potential extraterrestrial life, they often define a “habitable zone” in a planetary system where conditions might support life. These zones usually mark where in a planetary system temperatures could allow for liquid water, which depends on factors including how much light the system’s star emits and how far a planet is from it.

It’s also possible to define habitable zones around supermassive black holes, Schnittman says — if planets orbiting these types of black holes exist. However, any such planets would get their light and warmth from sources other than sunlight.

For example, these black holes would probably have accretion disks, the hot halos of gas and matter that collect around massive black holes. These disks can be very bright and could provide light to orbiting planets, though it would likely be very different from sunlight on Earth.

When Schnittman watched Interstellar, the time warping on Miller’s planet got him thinking about other effects a planet might experience near a supermassive black hole. He realized that the effect that slows time on the planet would also shift light it receives from surrounding space to higher energies.

The effect, called “blueshift,” would potentially make light reaching a planet near a black hole more dangerous. Incoming light would get amplified to much higher frequencies, including the UV range. Exposure to such high-energy radiation can damage living cells, so a planet too close to a supermassive black hole may not be hospitable to life as we know it.

“Time really affects everything around us,” says Schnittman. “Not just our perception of reality, if you will, but it actually changes the reality, changes the blueshift. It can really make everything very, very different when time is running at a different rate.”