Life in the Clouds of Venus? Maybe Not.

Astronomers thought they detected phosphine — a gas often created by microbes — in Venus’ clouds. A new study suggests that analysis was incorrect. 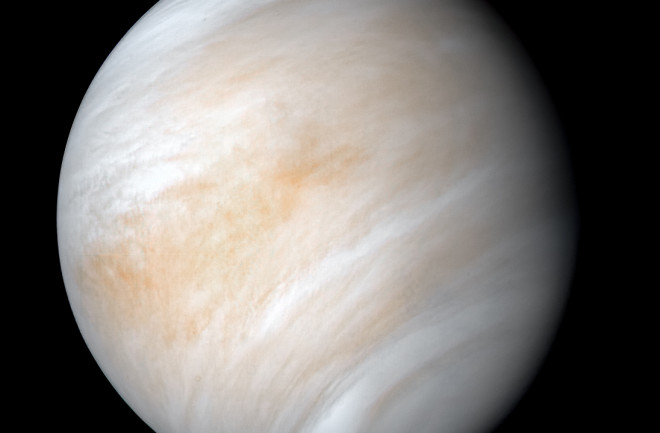 In 2020, astronomers said they'd detected phosphine in the clouds of Venus. On Earth, the toxic gas is often created by microbial life. (Credit: NASA/JPL-Caltech)

A new study focused on the clouds of Venus may dash hopes for finding life on Earth’s hellish neighbor.

Last September, researchers sparked a media frenzy when they discovered a chemical called phosphine floating in the clouds of Venus. Phosphine is a toxic gas that typically forms as a byproduct of microbial life on Earth (though there are some natural sources, too). The finding caught astronomers off guard. Absent life, they couldn't explain the surplus of phosphine based on our current understanding of Venus.

"There is a chance we have detected some kind of living organism in the clouds of Venus," Cardiff University astronomer Jane Greaves, who led the United Kingdom-based team, said during their announcement of the discovery. "This is very exciting and was really very unexpected."

And that’s why the phosphine discovery was met with both excitement and a heavy dose of skepticism. Some wondered whether the detection itself was simply an error. And even the scientists behind the study cautioned that there could be some unknown chemistry that explains away the phosphine, even if it's not fully understood.

Now, a new and exhaustive analysis has come to a completely different conclusion. In a study set to be published in The Astrophysical Journal, another team of astronomers say that the signal wasn't from phosphine at all. Instead, it was from sulfur dioxide, another toxic gas not indicative to life.

Thanks to Venus' crushingly thick atmosphere, its surface is hot enough to melt lead, reaching nearly 900 degrees Fahrenheit (480 Celsius). However, as you ascend in altitude, those temperatures eventually hit a Goldilocks level that would be quite comfortable to humans. This is what inspired scientists like Carl Sagan to wonder whether life could survive in Venus’ clouds. And a series of discoveries in recent years have boosted support for that idea.

The latest chapter of the saga dates back to 2017, when a UK-based team was observing Venus using the James Clerk Maxwell Telescope in Hawaii. The goal was to spot an uncommon biosignature — phosphine. Yet still, when they found it, they were surprised.

Skeptical, the group spent the next 18 months attempting to explain away their detection. They turned to another radio observatory — an enormous array of radio telescopes in Chile called the Atacama Large Millimeter/submillimeter Array (ALMA) — to double check the Maxwell Telescope's results. They found the phosphine signal in the ALMA observations, too. And that’s when they decided to publish their results.

Spectral data from both the Atacama Large Millimeter/submillimeter Array in Chile (white) and the James Clerk Maxwell Telescope in Hawaii (gray) are superimposed in this image of Venus taken by ALMA. Astronomers initially claimed the dip in signal strength was due to the biosignature phosphine in the clouds of Venus absorbing radio waves, but a new analysis suggests the culprit is sulfur dioxide. (Credit: ALMA (ESO/NAOJ/NRAO), Greaves et al. & JCMT (East Asian Observatory))

Yet, it wasn’t long until the team realized they’d made a mistake. In a re-analysis of their initial results released in November 2020, they announced that their new interpretation suggests significantly less phosphine in Venus’ atmosphere than they initially thought. However, they said, the signal was still there.

In the months since, other astronomers have been looking for evidence that might either confirm or refute this perplexing find. One team took additional observations with a telescope on Hawaii's Mauna Kea, but they couldn’t tease out a phosphine signature. Another team used data from old Venus probes, finding some hints of what might be phosphine. But ultimately, they couldn't confirm the original results.

Now, a group of researchers from the University of Washington say they’ve completed an exhaustive reanalysis of the phosphine signal. And they've concluded that it's probably not from phosphine at all.

These astronomers say that the original team made a mistake, and the observed signal is actually caused by sulfur dioxide — another gas that absorbs a similar wavelength of light as phosphine. Sulfur dioxide is a pungent gas that's familiar to us because it smells like burnt matches; but it’s not typically associated with life.

To reanalyze the initial team's results, the new team, which also included a number of NASA scientists, utilized a computer model of Venus’ atmosphere.

They plugged in decades of observations from ground-based telescopes and various spacecraft that have visited the world. Then, the researchers modeled the conditions and identified the various chemicals that would make their way into Venus’ thick atmosphere.

It's important to understand that every chemical absorbs wavelengths of light in their own unique way — giving it a specific spectral signature. But sometimes, certain ones can be hard to distinguish from one another. The model let these latest researchers reanalyze the first team's initial spectral observations, and then compare those to what other instruments have detected over the years. Their results suggest the signal in question was not from phosphine, but instead sulfur dioxide. And that makes sense, considering sulfur dioxide is one of the most common chemicals found in the atmosphere of Venus.

The latest team also found that the signal most likely didn’t even come from the altitude the initial researchers thought; it came from much higher up in the mesosphere. The mesosphere exists some 50 miles (80 kilometers) above the planet’s surface, where the Sun’s radiation would almost instantly destroy highly fragile phosphine.

In fact, for that much phosphine to end up in Venus’ mesosphere, it would have to be injected at a rate roughly 100 times greater than photosynthesis delivers oxygen into Earth’s atmosphere.

So, does this rule out the idea that life could exist on Venus? Not hardly.

There’s still hope to hold on to, though, even if the phosphine signal isn’t real. Venus still has a Goldilocks temperature and pressure range found at certain altitudes. And just because there’s a reason to doubt the latest evidence of venusian life doesn’t mean new evidence won’t emerge in the not-so-distant future.