Jupiter's frigid moon could be one of the best bets for extraterrestrial life in our solar system. 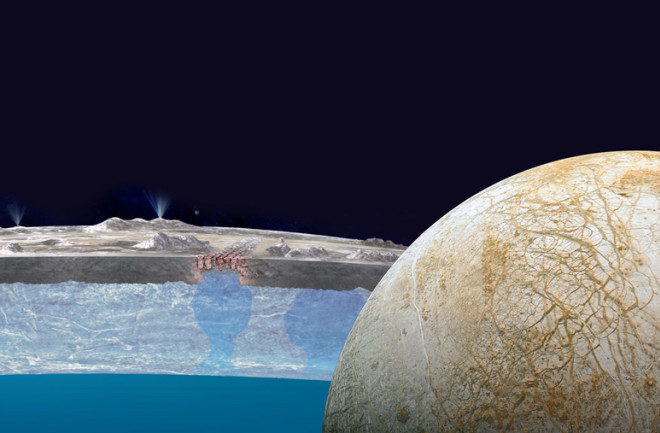 Jupiter’s frigid moon Europa could be one of the solar system’s best bets to find extraterrestrial life. Scientists have long wondered if the moon’s vast subsurface ocean, sandwiched between a rocky mantle and a global sheet of ice, could prove as habitable as Earth’s early oceans.

And now there is further evidence. Caltech astronomer Mike Brown and NASA planetary scientist Kevin Peter Hand have discovered a new chemical “fingerprint” on Europa’s surface indicative of life: magnesium sulfate. The salt likely originated in the moon’s rocky mantle before it migrated through the ocean to the surface.

This has two important implications. First, scientists can learn about Europa’s watery depths just by studying its surface. Second, it builds the case that life could swim within this ocean.

“Having water interacting with rock is important from a habitability standpoint because it means you have a liquid water environment that has some of the chemistry we think could be essential for life,” Hand says of the 2013 find. Maybe it’s just the push needed to fund exploration of this intriguing world.

[This article originally appeared in print as "Life in Europa's Salty Ocean?"]