Life Could Thrive in Oxygen-Rich Briny Water on Mars 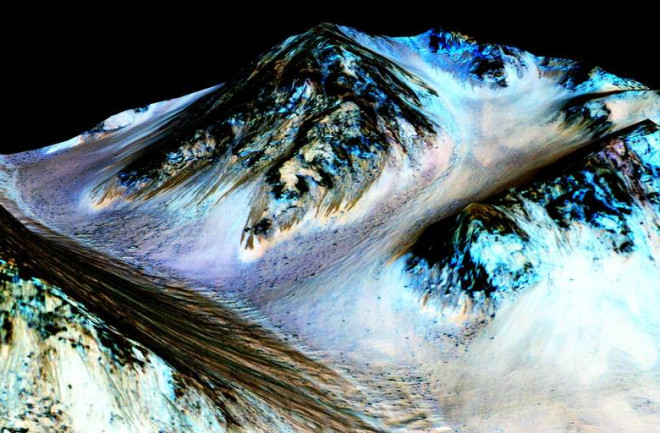 Scientists think that these dark, narrow slopes on Mars could have been created by flowing water. One new study suggests that, if briny water exists on Mars, it could contain enough oxygen to support life. (Credit: NASA/JPL/University of Arizona) Just below the surface of Mars, scientists suspect that there might be briny waters that, according to a new study, could hold enough molecular oxygen to support certain types of life. As light breaks down carbon dioxide on Mars, a little bit of oxygen is produced. Previously, it has been thought that the minuscule amount of molecular oxygen on Mars could not be enough to support even microscopic life on the Red Planet. However, if there are briny waters just below the planet’s surface, those waters could hold enough molecular oxygen to support aerobic microbes or even simple animals like sponges. Vlada Stamenković, a researcher at NASA’s Jet Propulsion Laboratory, and colleagues came to this conclusion by calculating how much molecular oxygen could be dissolved in Martian briny waters if they did exist. The team replicated conditions that would exist in these briny waters and would be expected close to the Martian surface — including details like pressure, temperature and salt content. However, for their findings to be true, this water has to exist on Mars and exchange oxygen with the atmosphere, Stamenković said. This is very exciting news, because if there is water on the planet, there “should be enough oxygen in those brines to support aerobic respiration,” Stamenković said. Oxygen was a major driver of evolution on Earth, he discussed, and if scientists are able to confirm these briny waters and dissolved oxygen in those waters, it would be a major step forward in understanding life and Mars. At this moment, we know that “water can exist,” on Mars, but that “doesn’t mean that water is there,” Stamenković said. “What we really have to do now is we really have to work whether there are brines on Mars and where they are,” he added. However, the scientists caution that as we work to confirm briny waters, dissolved oxygen, and maybe even life on Mars, we should keep an open mind because life as we know it might not exist in that same way outside of Earth. This work was published today, October 22, in the journal Nature Geoscience.