Liberal distrust of the scientific consensus

Yesterday in my review of the recent Pew survey comparing attitudes of scientists and the general public I emphasized the fact that scientists are disproportionately godless liberals. But there are some issues where it seems that the Left is on the forefront of science-skepticism. There has been talk here on ScienceBlogs about the disproportionate Lefty orientation of anti-vaccination activists. From what I can tell this is true, but anti-vaccination sentiment is too shallow of a sentiment for it be starkly political, at least according to these data (there's little party difference). On the other hand there is a big difference when it comes to animal testing, scientists have very pro-animal testing attitudes while the public is ambivalent, with Democrats split, and Republicans favoring by a 2:1 margin. There are bigger gaps here is between men and women, and the old and young, so much of the variation might be accounted for by non-political variables. But I want to focus on nuclear energy. The chart below lays out the gap between the public and scientists: 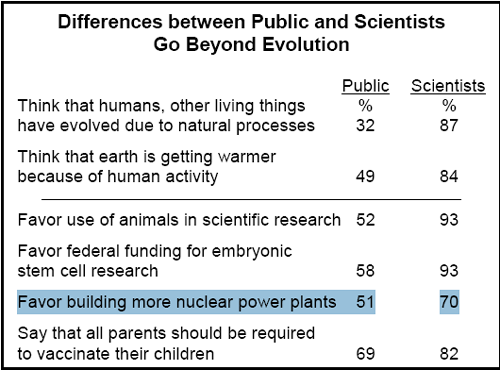 From the text of the Pew survey:

I am very struck by the high proportion of physical scientists who are in a position to understand the ins & outs of nuclear power who support the building of more plants. I suspect that the sex difference here can partly be accounted for by different disciplinary representations; physics & astronomy are far more male than the life sciences. In the GSS in 1993-1994 there were a few questions in regards to nuclear power. Liberals tended to be more suspicious than conservatives. Even when controlling for race and education the pattern was evident. I've posted that data at Secular Right. I also split by sex, and though if you limit men only the difference is ameliorated it remains.