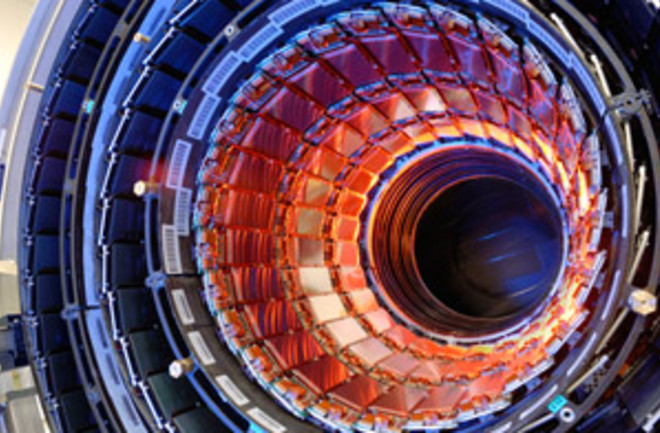 Oops! Sorry. I mean "most" powerful. Particle accelerator, that is. On November 30, 2009, it accelerated two beams of protons moving in opposite directions each to an energy of 1.18 TeV - that's trillion electron volts, well above the previous record of 0.98 TeV. When it's all ready to go, the LHC will get those beams up to 7 TeV, high enough -- we hope -- to start doing some serious science, and giving investigators a chance to see how the Universe ticks. For those who are curious, an energy of 1.18 TeV is about 1.9 ergs, which seems like a ridiculously small energy. An erg is very roughly the amount of kinetic energy a falling raindrop has... but a raindrop has a lot of protons in it. In the case of the LHC, each proton in the beams will have that much energy! Putting it another way, the speed of the protons moving in the beams when they are juiced up to 7 TeV is 99.999999% of the speed of light. They could travel to the Moon in just over one second. It took the Apollo astronauts more than three days to cover the same distance. The total energy in the beams, as my friend Brian Cox points out, is equivalent to a battleship moving at several miles per hour. And that's just before the protons smash together. The collisions will be epic. So this is yet another milestone on the way to real and cutting-edge science, which is slated to begin in early 2010. Stay tuned!