Let's Go Get Duned. Or More Precisely, Draaed — on Mars! 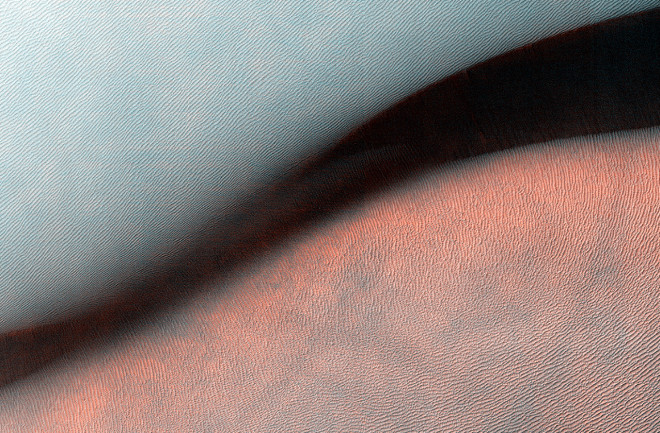 This beautiful sandy landform on Mars, called a "draa," was imaged by the HiRISE instrument aboard NASA's Mars Reconnaissance Oribter on on Jan. 6, 2014. (Source: NASA) To my eye, the image above looks like a beautiful work of art — something I could easily see hanging in a gallery. If a photographer had taken it, I don't think many would disagree with that characterization. And in a sense, a photographer did take it — just not a human one. What you're looking at is an image acquired by the HiRISE instrument on NASA's Mars Reconnaissance Orbiter. HiRISE stands for "High Resolution Imaging Science Experiment," and since 2006 it has imaged hundreds of swaths of the surface of the Red Planet in unprecedented detail. This image from HiRISE shows a fascinating feature called a "draa" in Juventae Chasma, a large depression 16,000 feet below the surrounding terrain. A draa is sandy landform larger than a dune. Its wavelength — meaning from crest to crest — is greater than 1 kilometer. Just as a dune has a rounded aspect on its windward side, and a steep face called a "slipface" on its downwind side, so does a draa. The dark crease running across the image is the shadow cast by the towering slipface of the draa, which is probably hundreds of meters high. You can also see a number of features superposed by Martian winds on the draa: ripples, transverse eolian ridges, and dunes.

This video offers a beautiful visual tour of these features, and an explanation of each one.