Let's Ditch the Boring Bunny! The Scientific Case for the Easter Echidna or Pasch Platypus 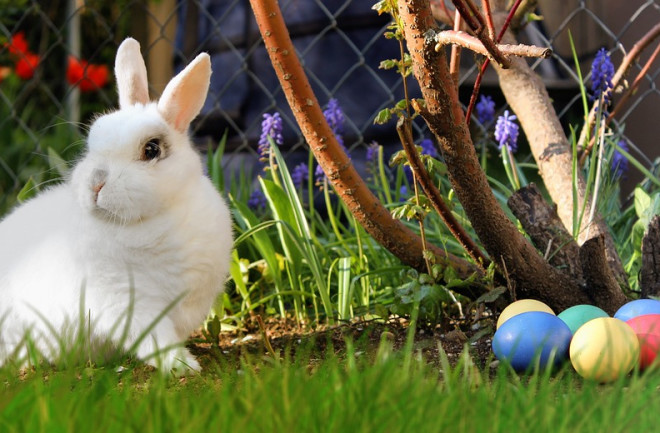 How can a bunny bring eggs?! Photo Credit: geralt It's time to have a serious talk about the Easter Bunny. I know, the long ears and twitchy nose are super cute. But it makes no sense for them to bring eggs for Easter. As members of the family Leporidae—which includes all hares and rabbits—bunnies bear live young. In fact, having lots of squirming babies is one of their most quintessential traits. We don't have the saying "breed like rabbits" for no reason. They're so prolific that over 2,000 years ago, Aristotle suggested they can do something few animals can: conceive while pregnant. It's known as superfetation or superconception, and it's a rare feat mostly performed mostly by some fish species. In 2010, researchers demonstrated that European brown hares are not only capable of it, it's one way they increase the number of offspring they have each season. But while that's impressive and all, they don't lay eggs, and being productive is hardly enough to warrant the Easter bunny's reign as the paschal mascot, especially when it actually makes them kind of a problem. European rabbits have found their way to the US and Australia and bred like bunnies do to become serious invasive pests. It's thought that there are billions of these animals now living on other continents, eating their way through resources that native species need to survive. They can cause so much damage that their impacts linger decades after the last invasive rabbit has been removed. And bunnies aren't even an Easter thing in some places. In Switzerland, easter eggs are brought by a cuckoo—which, given their habit of leaving their eggs in other birds' nests, seems pretty appropriate. So I say we ditch the bunny, and go with one of the egg-laying mammals which are more logically suited to the role of seasonal egg-bearer. I'm talking, of course, about one of the species in the order Monotremata.

https://www.youtube.com/watch?v=K5Y2h5zjpWU Monotremes are the oldest lineage of mammals. It's estimated that they split from all other mammals—the lineage that includes us—some 200 million years ago. They have hair, like us, and produce milk, like us, but they retained the reptilian habit of laying eggs. Now, the last remnants of this ancient group—five species in total—are making their last stand down under. Before marsupials made it to Australia some 70 to 50 million years ago, monotremes dominated the continent. To outlast the influx of kangaroos and their kin, they took to the water—a place where pouched marsupials rarely dare (the echidnas later returned to land). But their continued existence is uncertain, as their habitats continue to shrink to accommodate us, and invading species like rabbits drain resources from what little remains.

Now this makes sense. Original Photo Credit: Mariel Carr The platypus (Ornithorynchus anatinus) is the sole living member of the family Ornithorhynchidae. It inhabits the freshwater streams and rivers of Australia, where it feeds on aquatic invertebrates like crayfish. To find such elusive, underwater prey, the animal relies on electroreception—so they're basically miniature, furry sharks. Their eggs are much smaller than the traditional Easter variety—little, leathery things less than half an inch across and spherical. Of course, a full grown adult platypus is much smaller than a chicken. While chickens generally weigh in between 6 and 8 lbs, adult platypus are a modest 3 lbs or so, tops, and just 15 inches from tip to tail. Though some 5-15 million years ago, a much larger platypus roamed Australia. This giant platypus (Obdurodon tharalkooschild) was twice as big—about three feet from tip to tail. https://www.youtube.com/watch?v=a6QHzIJO5a8 Male platypus are equipped with venomous spurs that they use to battle each other over females. That makes them the only mammal to wield a venomous sting (about a dozen or so have venomous bites). And, as I explain in the first chapter of my book Venomous, their venom is excruciating. It's reported to be so painful that morphine is rendered useless. To toxinologists, though, it's exciting for bioprospecting, as it contains at least 80 unique toxins with potentially useful biological activities. But their venom isn't the only potential source of new drugs. Platypus milk contains an antibiotic protein unlike any scientists have ever seen. Because it's so different from the antibiotics we use today, researchers hope that it might help doctors fight against the rising problem of resistant 'superbugs'. The animals likely have this special germ-killer because, unlike us, they don't use nipples—milk is basically just sweat from the body to be lapped up by their young.

See? They're perfect Easter mascots! Original Photo Credit: paweesit There are four living species of echidna in the family Tachyglossidae—three long-beaked species (genus Zaglossus) and one short-beaked echidna, also known as the spiny anteater. As that common name implies, the short-beaked echidna (Tachyglossus aculeatus) is a spine-covered mostly Australian insectivore which feasts on ants and termites. Its larger, longer-nosed cousins are somewhat less pointy and prefer worms, and they live a little to the north in New Guinea. Echidnas can live for half a century or more—likely thanks to a much slower metabolism and a lower body temperature than other mammals. And like platypuses, they have electrosensors in their snouts, likely an evolutionary throwback to a time when their ancestors lived more aquatic lifestyles. https://www.youtube.com/watch?v=frZGhk0i228 For echidnas, winter is the season for egg-making. In July and August, male short-beaked echidnas seek the company of a female with the hopes of using half of their four-headed penis to deliver sperm to her two-tracked vagina. Multiple males form a long train and follow the female relentlessly until she decides she's ready. Then, they dig a trench, and battle for mating rights. Like platypuses, male echidnas have venomous ankle spurs, but their venom doesn't appear to have a combative function. Instead, it's thought to be involved in scent signaling during the mating season. On occasion, males will find a female who is still hibernating, and take the opportunity. The female awakes from her slumber pregnant. A mated female echidna lays a single, small egg, which she incubates in a pouch in her belly for a little over a week until it hatches. The young echidna—called a puggle—begins its life smaller than a jellybean, and slurps up the mom's tasty milk for about two months until it's large and spiny enough to tough it out in the real world. https://www.youtube.com/watch?v=4YB6mVWadKQ