Leonids tonight: will the lion roar once again? 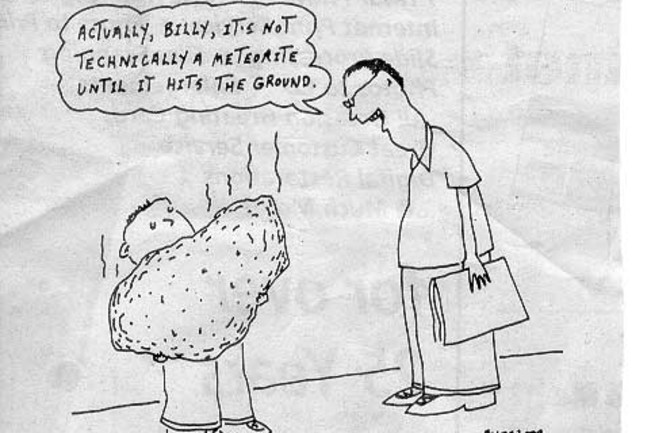 [My apologies for posting this so late: I moved into a new office at work, and had a ton of deadlines at home too.] In the late 1990s, the annual Leonid meteor shower had several strong "bursts" of activity, and the people who keep track of that sort of thing say it might happen again tonight. Meteors are bits of rock, metal, or ice that enter our atmosphere at high speed and burn up, giving off a lot of light. Meteor showers are when the Earth plows through a stream of these guys, and we see lots of meteors. Comets are the usual culprit: as they get near the Sun, the ice holding the comet together sublimates (turns directly into a gas), which is what creates the tail and the fuzzy head. But little bits of gravel also get loose, forming a long ribbon or stream that orbits the Sun independently... but still near the original orbit of the comet. As the Earth crosses these ribbons, we get showers, and they happen at the same time every year, more or less. In general, the number of meteors is the same from year to year, but that can change. For example, if the parent comet made a recent pass of the Earth, the meteor rate can be beefed up. This is what might happen tonight (Saturday/Sunday). The Leonids happen in mid November (I have LOTS more info on the Leonids on the main website; what I wrote was for the 1998 shower but the science hasn't changed!). The parent comet, Tempel-Tuttle, hasn't been around for a while, but the gravel and ice that got ejected from that passage is still out there. According to some scientists, we may be headed into a denser region of one of those streams tonight, causing a meteor storm-- lots and lots of meteors. These things are notoriously hard to predict, but earlier predictions were pretty close, so I'm taking this one seriously. The best view is from England and Europe, since it'll be dark when the storm is predicted to occur. Meteors are generally best watched after local midnight (literally halfway between dusk and dawn), but the storm is predicted for around 11:45 to 1:30 a.m. Eastern (US) time. However, if the prediction is off by a few hours anyone might get a good view! I plan on being out tonight. I'll go outside every hour or so after dark just to see. Leonids are cool because they orbit the Sun in the opposite direction than we do, so we meet them head-on, adding our orbital velocity to theirs. They scream in about as fast as anything can, upwards of 70 km/sec! Since their brightness depends on their energy, and their energy depends on their velocity, this means you get brighter meteors. Many are extremely bright, and they move much faster than normal meteors. If it weren't so miserably cold (and in California, wet) in November, this would be my favorite shower. The Sun is shining now, so I'm hopeful. Anyway, for more info including observing tips (dress warmly, use a recliner/chaise lounge, get a good, wide view of the sky), go to the Sky and Telescope website. And enjoy!