Lava Meets Ice and Snow During the 2013 Veniaminof Eruption 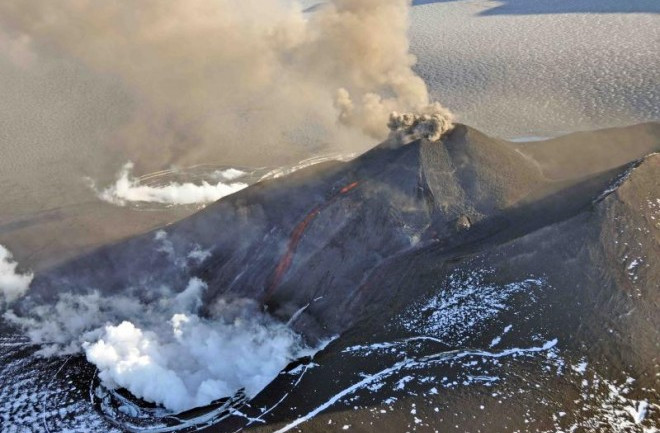 A small lava flow and ash plume from the cinder cone within the Veniaminof caldera, seen on August 18, 2013. Image: Game McGimsey, AVO/USGS. Thanks to its remote location and Alaskan weather, we haven't been able to see a lot of what has been going on in the Veniaminof caldera eruption over the past few months. Sure, we're had some satellite views that show that ash is getting deposited on the snows of the area and a lava flow has been issuing from the cinder cone within the caldera, but precious few direct observations have been made. However, over the last month, we've been able to see what is occurring within the caldera. Just last week, Game McGimsey (AVO) and Ben Edwards (Dickinson College) took a spin in a helicopter into the caldera to see what has occurred (see above) -- and it has been a busy summer within the Veniaminof caldera (which still sits at Orange/Watch alert status). The story seems to be one of fire and ice. The lava flows continuing to issue from the cinder cone hit a wall of snow and ice within the caldera very quickly and look to disappear underneath it (see below). The snow and ice itself is covered in a layer of dark black volcanic tephra (ash and other volcanic debris), which will likely mean it will melt more rapidly with the sun beating down on the darkened material. What is so stunning to me is the way the lava flow interacts with that snow and ice pack, deforming the edges of the snow and ice as seen in the cracks near where the lava flow hits the it, either due to melting or pushing the snow and ice out of the way (like at St. Helens in 2004-08). However, the snow and ice isn't completely obliterated, so the lava flow is melting some of the snow/ice within the caldera near the cone (see the steam plumes at the nose of the flows), but not all of it. The lava flows themselves are relative small, as the shot of a red-hot basaltic lava flow on the slopes of the cone shows (see above) -- strongly confined by levees, the flow makes it way to the edge of the snow and ice, producing a bright, white plume of steam (as opposed to dark grey ash that is emitted from the summit vent of the cinder cone).

Lava flows from the 2013 eruption of Veniaminof meeting the snow and ice (covered in volcanic tephra), seen on August 18, 2013. Image: Game McGimsey, AVO/USGS. Now, this sort of thing is common at Alaskan volcanoes that have a persistent snow pack and/or glaciers. However, it has also happened in the Cascades of Oregon and Washington -- not today, but in the past during the last glacial maximum when the high Cascades were heavily glaciated. I've written some about the glacial features you encounter across the Oregon Cascades, including tuyas and lava pillows. You can definitely imagine the latter forming along the edge of the Veniaminof lava flows right now, so being able to see this lava flow interacting with the snow and ice in the present is an excellent way to envision what happened in the Oregon Cascades 12,000 years ago. Understanding what features we want to seek if we're looking for previous lava-ice interactions can help in reconstructing past climates in places where there is active volcanism, so getting these new looks at the action at Veniaminof doesn't only satiate our curiosity about this Alaskan eruption, but also what happens when lava flows occur in places buried in the deep freeze.