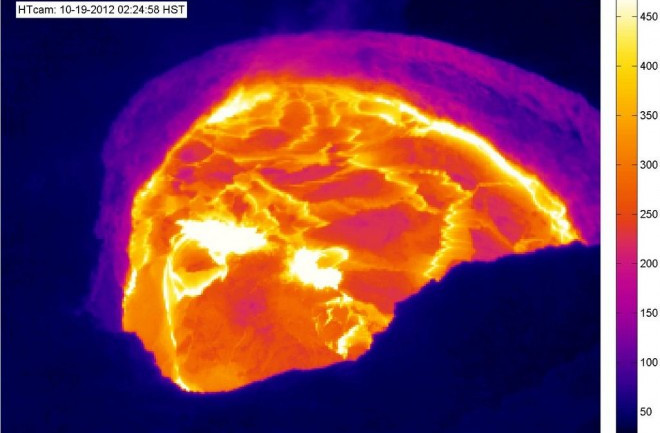 The lava lake at Halema'uma'u Crater on Kilauea seen at its current high stand on Oct. 19, 2012 in the HVO thermal webcam. Hot colors in the crater show were lava is breaking though the cooler crust that forms quickly on the lava. If the lava lake level tops the crater rim, new lava flows will coat the caldera floor. Image: Captured by Jim Acker from the HVO webcam. I've been following the events at Kilauea all this week, but thanks to my laptop issues (which should be resolved today) and a nasty fall cold, posting was more challenging than anticipated. However, things are looking up - just like the state of the lava lake in the Halema'uma'u Crater at Kilauea. The lava within the crater is at its highest level since it formed in 2008, reaching within 50 meters of the floor of the crater, now covering the inner ledge - and the surface of the lava lake (video) is quite active as it fills (see above). UPDATE: Looks like I was confused about the terminology HVO uses for parts of the crater/caldera complex. I've fixed some of the description after the jump to rectify this. Thanks to Eruptions reader Randy for pointing out the problem. Before I get into the details, I wanted to just give a brief overview of the geography at the summit of Kilauea. The large Hawaiian shield volcano has a caldera at the summit - a collapse feature. Unlike the catastrophic formation that we associate with calderas like the ones found at Crater Lake or Toba, the Kilauea caldera was likely formed by fairly passive subsidence of the floor of the volcano's summit starting around 1,500 years ago (with some continued subsidence in the 1700s), leaving a 3- by 5-kilometer depression (see below). It is common for basaltic shield volcanoes to have these more slowly formed calderas caused by draining of basalt from summit magma chambers, leaving the ground surface to slump into the voided space. Now, that caldera is sometimes referred to as the Kilauea caldera, which is different than the Halema'uma'u Crater that sits within the caldera. The Crater is a pit crater formed by an explosive eruptions on Kilauea that may have started as early as 1790, but its exact origin is unclear. If you look at a geologic map of the Kilauea summit area, there is another pit crater to the east of the caldera - Kilauea Iki - that was active during the 1959 eruption of the volcano. UPDATE: Now, nothing is as easy as it seems. If you take a look at the NASA Earth Observatory image below, you'll see that within the Halema'uma'u Crater there is a vent - and in that vent is where the lava lake lives. So, when the reports talk about the level of the lake, they are referring to the depth of the lake relative to the floor of the crater within the caldera. So, four levels exist - the original surface at the summit of Kilauea, in which the caldera is inset, in which a crater is inset, in which a vent with a lava lake is inset! You get the picture.

A July 15, 2010 ALI image of the summit area of Kilauea, showing the caldera in which the Halema'uma'u Crater sits. Note the lava flows that coat the bottom of the caldera from repeated breakouts within the caldera - the youngest flows are darkest. Image: NASA Earth Observatory. So, today, when you look from HVO toward the summit caldera, you can see the degassing from the Halema'uma'u Crater. One potential eventuality from the rising lava in the crater is the lava to overtop the crater rim, forming lava flows within the caldera and within the crater itself. If you look at the image of the caldera and crater floors (above), you can clearly see that lava flows have periodically paved the surface, so it shouldn't be too shocking for this to occur. It all depends on the rate of magma influx into the summit chambers at Kilauea - the more magma, the more pressure to get the lava lake level to rise (kind of like a well after the rainy season). The crater is releasing ~750 tonnes of sulfur dioxide per day right now according to the latest USGS HVO status update for the volcano and the vigorous activity in the crater is producing some ash and Pele's Hair that is falling near the crater. The lava lake at the summit isn't the only one active on the volcano - the lava lake at the Pu'u O'o crater on the east rift zone has also been active based on some new video of the area.

An Oct. 18, 2012 webcam capture of the surface of the Halema'uma'u lava lake. You can get a sense of where the lava is filling by looking at the darker solidified "plates" on the surface - to the right, they are stretching and cracking, but in the bottom left, they are crumpling and piling up. Eventually, the plates may adhere to the walls of the pit or get "subducted" back into the lava lake. Image: webcam capture by Mark Burns from HVO webcam. You can see the activity live at both lava lakes on the HVO webcams for Halema'uma'u and Pu'u O'o. {Special thanks for Eruptions readers Jim Acker and Mark Burns for the webcam captures of the Halema'uma'u Crater lava lake via the HVO webcams}