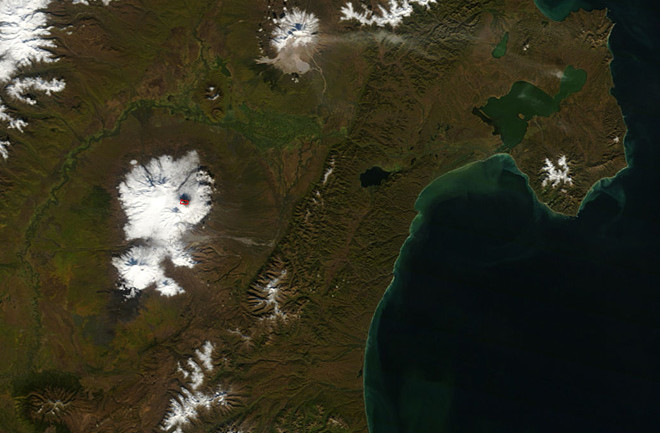 Kliuchevskjoi (bottom) and Shiveluch (top), both producing small ash plumes. Kliuchevksoi also shows lava flow activity on its northeastern flank as evidence in the thermal anomaly (red box) in this Terra image taken September 28, 2013. Image: NASA Earth Observatory. Now that the shutdown is finally over, we can look forward to new images from the NASA Earth Observatory. I had originally started this post to fill in some of the time that we've been without the EO, but even now, I'm sure the backlog of imagery is impressive.Thankfully, we'll also be getting the first new Global Volcanism ProgramWeekly Volcanic Activity Report next week, so the trickle of information will widen quickly. This news comes out of far eastern Russia, where Kliuchevskoi has now become the most vigorously active volcano on the Kamchatka Peninsula over the last few weeks. The activity appears to be mainly lava fountains (see below) and flows from the summit vent and the new activity is clearly seen on multiple satellite images taken over the last few weeks. You can notice in both images that Kliuchevskoi's neighbor, Shiveluch, is also putting out a small ash plume (see above). This current eruption at Kliuchevskoi is quite impressive -- KVERT (the volcano monitoring agency of the region) is reporting multiple lava flows (see image below) on the northwestern flank, along with a second vent location between Kliuchevskoi and Kamen (noticeable on the 9/28 Terra image, above). Due to this flank vent activity, there has been some significant snowmelt from the Bogdanovich glacier on the volcanic massif. Ash plumes from this eruption has been reaching 7.5 to 10 km (24-32,000 feet).

Intense Strombolian activity at Kliuchevskoi on October 17, 2013. Lava fountaining and a lava flow can both be seen in this shot. Image: Yu. Demyanchuk / KVERT. As usual, that isn't the end of the story in Kamchatka -- some of the latest news from KVERT has active eruptions at no less than 3 volcanoes (the aforementioned two along with Karymsky) while an additional 3 show at least signs of active vent area (Bezymianny, Tolbachik and Kizimen). Gorely, the only other volcano listed as on Orange or Yellow alert status by KVERT is right now only showing signs of seismicity, suggesting magma might be moving under the volcano.

Terra/MODIS image of Kliuchevskoi (bottom) and Shiveluch (top), showing the new lava flows (in red box), mainly from the flank vent seen on October 15, 2013. A weak ash plume can also be seen coming from Shiveluch. Image: NASA Earth Observatory. KVERT does have three webcams pointed at Kliuchevskoi (one, two and three), although they seem to be variably operational right now. Try your luck and maybe you'll get a glimpse of this vigorous activity at one of Kamchatka's largest volcanoes.