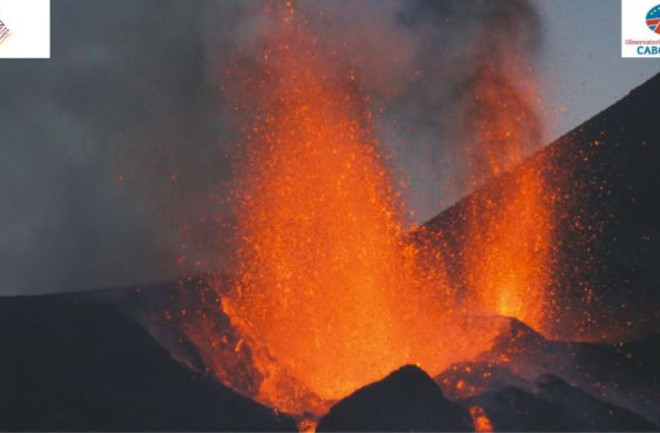 Lava fountains during a strombolian eruption at Fogo in the Cape Verde Islands, seen on November 29, 2014.

INVOLCAN, used by permission. The eruption from the slopes of Pico in the Fogo caldera of the Cape Verde Islands continues, albeit at a slower pace, and it has caused some serious damage to roads and towns on the small island. The main road between the National Park and the town of Portelo has been severed again as the lava flows moved across the island at ~20 meters/hours. You can check out some impressive video footage of the lava flows as they encroached on Portelo and took out buildings in the National Park (see below), including the park's headquarters. Luckily, as with most lava flows, people can be moved out of harms' way before the lava arrives, but structures are no match for the flows. Only a police and military contingent remains in Portelo after the ~1200 people who lived there were evacuated as the eruption isolates the settlement. Cape Verde's Prime Minister José Maria Neves declared Fogo a disaster and said that the country's government is working on both medium and long-term plans if the eruption continues. Much of the area that has been covered by these new lavas are vineyards, so the economic impact on the island could be significant.

A building destroyed by lava flows at Fogo in the Cape Verde Islands, seen on December 1, 2014.

INVOLCAN, used by permission. The eruption itself has produced not only impressive lava flows, but also strombolian explosions and lava fountains (see above). Seismic tremor and gas emissions appear to have waned some on December 1, but with eruptions such as these, volcanologists monitoring Fogo say it can change quickly. You can see a pile of pictures of the eruption on the INVOLCAN Facebook page as the group from the Canary Island helps observe and assess the situation at Fogo.