Lava Flows and Ash Plume as Eruption Continues at Pavlof 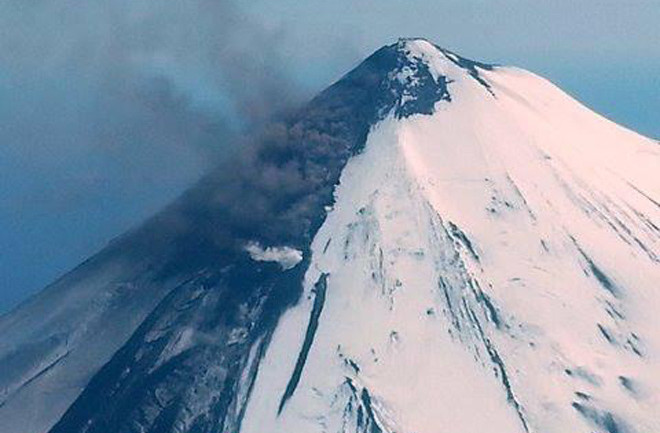 The small ash plume and lava flow from Pavlof in Alaska, seen on May 14, 2013. Image: AVO/USGS by Theo Chesley. The eruption that started on Monday at Pavlof in Alaska continues unabated. The Alaska Volcano Observatory is reporting a dark steam-and-ash plume reaching ~6 km (20,000 foot) and drifting to the southeast by pilots passing nearby and the glowing lava extruding from the summit crater was spotted at night in Cold Bay, almost 60 km away from the volcano. Constant seismicity has been recorded on the Pavlof webicorder since the eruption began, all supporting the idea that new magma has reached the surface and is erupting as lava flows down the northeastern slopes of Pavlof -- and the images by pilot Theo Chesley (posted by AVO) show the crater just off the summit of the volcano (see above), with a dark (but small) ash plume and dark lava flow heading down the slope. There looks to be evidence of small debris flows related to the eruption as well related to lava-snow interactions. A Terra/MODIS image from yesterday (5/14) captured the small plume from the activity at Pavlof, along with the thermal anomaly related to the lava flows as well (see below).

Terra/MODIS image of the ash and thermal anomaly associated with the eruption of Pavlof. Image from May 14, 2013, courtesy of NASA. There doesn't seem to be any indication that this eruption is ending soon, so we should probably expect to see more lava flows accompanied by steam-and-ash plumes. However, [SPECULATION] if a dome forms in the crater, then we might see pyroclastic flows or more explosive activity. So far, that doesn't seem to be in the cards. UPDATE: As Dr. Boris Behncke points out in the comments, Pavlof doesn't have a history of dome growth, so this is a very unlikely scenario. We should expect more lava flows and fountaining, along with snow-lava interactions here. You can see more images of the eruption on the AVO page for Pavlof -- be sure to check them out to see how the eruption has evolved since it began on May 13. You might be able to catch a glimpse of the eruption on this FAA webcam in Cold Bay pointed towards the vicinity of Pavlof, but low clouds seem to always be in the way.