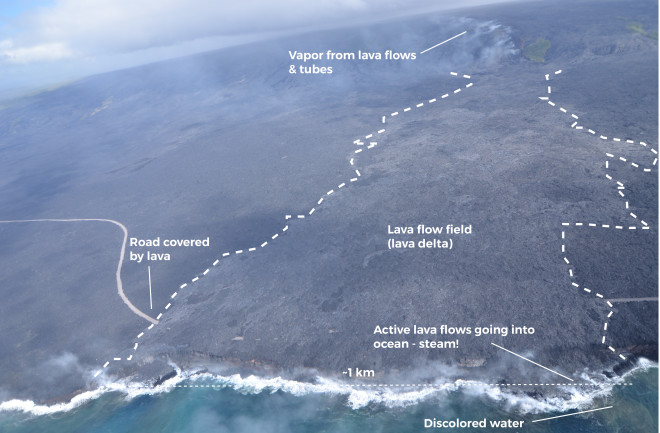 The 61G ocean entry on Kilauea, seen on August 21, 2016. The lava delta is the wide swath of lava flows as they spread out on the pali (plain). However, another lava delta is constructed as the lava hits the ocean -- this is where the greatest hazard lies. USGS/HVO; Annotated by Erik Klemetti The month of August was an exciting one for the island of Hawai'i. Not only did the island add over 5 acres to its shores, but the restless volcano of Kilauea on its eastern coast ran the gamut from lava flows to explosive eruptions. The 61G lava flow field has been entering the ocean near Kamokuna for a few months now. The lava that is being fed through lava flows and tubes from the Pu'u O'o crater on the east rift of Kilauea has created a kilometer wide zone of lava flows (see above) reaching the Pacific Ocean. This has created a lava delta where the flows reach the current sea cliff. Any ocean entry is a spectacular sight (see below). However, it is also very dangerous. Take lava at ~1200ºC and dump it into cool ocean water and you get steam and explosions. So, you get to close to one of these ocean entries (like some footage I've seen of daredevils lately) and you run the risk of either getting caught in an explosion or inhaling super-heated steam full of volcanic glass fragments and acid. Sounds like fun, right?

Lava reaching the ocean on August 16, 2016. All the steam is likely laden with volcanic glass fragments and acid — it is dangerous!USGS/HOV This also means that any lava benches that are being built by the advancing lava flows are pretty unstable. They are platforms of glassy, rubbly basaltic lava that can collapse quite easily. So, walking out onto one of these benches to get a better view of the ocean entries is a very bad idea. Admire it from a safe distance on stable land. These sorts of lava flows making it to the ocean is what causes the island to continue to grow. Each new volcano is adding to the southeastern part of the island. Currently, a small submarine shield volcano named Loihi lurks off the southeastern coast of Hawai'i. Eruptions there and at Kilauea will likely someday cause the volcanoes to merge and extend the island even more, just like when Kilauea started erupting on the slopes of Mauna Loa ... and Mauna Loa started erupting on the slopes of Mauna Kea. Up at the summit of Kilauea, the summit lava lake in the Halema'uma'u Crater is currently on the rise after inflation began overnight. That inflation was noticed a little later at Pu'u O'o and likely suggests that a new pulse of magma is filling in underneath the volcano. The Hawaii Volcano Observatory posted some great aerial footage of the lava lake taken in late July that shows the lava only about ~22 meters below the rim of the crater. Earlier in August, part of the walls of the lava lake collapsed and caused an explosion at the summit crater. Volcanic bombs made of molten lava as large as 60 centimeters (2 feet) across were thrown for hundreds of meters around Halema'uma'u, doing some impressive damage to some of the monitoring equipment installed at the summit by the U.S. Geological Survey (see below).

Scoria and damage from 6 Aug 2016 @ 2202 explosion triggered by rockfall above and into SE sink of lava lake.USGS/HVO You can see the lava flows and ocean entry on the HVO webcams pointed at the various sights of Kilauea.