"Largest Volcano on Earth"? It Is All About Timing 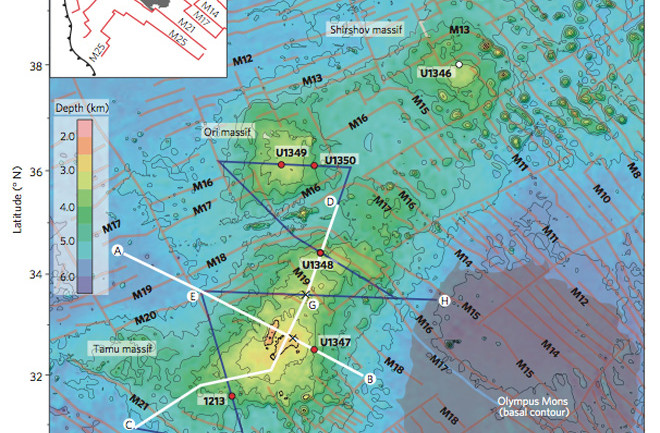 Bathmetry of the Shatsky Rise and the Tamu Massif in the Pacific Ocean. The lines represent paths of seismic profiles taken in order to interpret the structure of the oceanic crust in the area of Tamu Massif. The red dots are drilling locations on the volcanic center. Image: Figure 1 in Sager and others (2013), Nature Geosciences. Sometimes it can be difficult to separate the publicity-driven hooks for a new study in science from that actual findings of the study itself. A research paper itself is the distillation of years of works and reams upon reams of data and interpretation. Depending on the journal in which the study is published, that could mean trying to present the findings in as little as a few pages with a smattering of figures (the bigger the journal's reputation, the shorter the paper it seems to be these days). Then, that paper is taken by the press officers at an institution and distilled even more into a press release that might be a page where maybe a single figure and finding are touted with some quotes from the author that emphases BIG FINDING #1, with possibly a few brief quotes from other scientists who have had a day or two to look at some (possibly not all) of the paper. Once that press release is freed to the wild, then many in the media (I emphasize, not all in the media) descends, latches onto that BIG FINDING, makes it seem like that single paper unequivocally proves BIG FINDING and then takes chunks of the press release and maybe a secondary quote and we're left with a tiny vestige of what the original study had set out to do. This is what people hear about scientific research: "Dr. Someone makes BIG FINDING that is the biggest/fastest/deadliest/noisiest/hotter/furthest (circle one) discovery ever!" Now, I bring this up not to say that coverage of science in the media is a bad thing -- in fact, we likely need more of it. However, the way it is tackled, as trying to get across so much information in so little space, leaves us without the information needed to make any educated assessment of the study. The assumption that people can't understand complicated science (or don't want to understand) leaves us taking the "science" out of science and leaves us with an overdistilled undrinkable product. With that in mind, many of you have noticed a bevy of new articles proclaiming that the "largest single volcano on Earth" had been discovered. You look at the headlines and wow, it seems impressive: Scientists Confirm Existence of Largest Single Volcano On Earth

Ocean volcano may be largest on Earth, biggest in solar system

With those sorts of claims, we need some great supporting evidence to back up the idea that this volcano is not only potentially the largest on Earth but also possibly the biggest is the solar system. What we need to do is go back to the source of these claims and try to make sense out of the idea that somehow, we're been missing a volcano larger than Olympus Mons (currently the biggest in the solar system) here on Earth. The study by William Sager and others (appearing in Nature Geosciences) looks at an area of the Pacific Basin called the Shatsky Rise. The rise itself is a large plateau about the size of California that contains 2,500,000 cubic kilometers of most basalt and gabbro (the stuff of oceanic crust). Sager and others (2013) looked at one part of the Shatsky Rise, now called the Tamu Massif (named after Texas A&M University) on the southern end of the Shatsky Rise. The Shatsky Rise is thought to be an oceanic plateau formed by voluminous basalt eruptions -- like a flood basalt, but under the ocean. Flood basalts on land are constructed from a multitude of lava flows that issue from fissures over the course of hundreds of thousands to millions of years, so their submarine cousins are thought to form the same way. Where Sager and others (2013) diverge from this idea is they propose that Tamu Massif is, in fact, a singular volcano where almost all the lava flows came from the summit vent area. So, instead of a series of fissures across thousands of square kilometers each erupting lava flows that coalesce into a large plateau of basalt, they say that all this basalt was formed from thick flows of basalt all coming from the same place. Now, that is quite a statement. No other single volcano on Earth covers the same area as the Tamu Massif, so if it is one volcano, then it not only sets the bar, it takes the bar and bends it into a pretzel. As I said, any statement like this needs to be backed with strong evidence, so what evidence does Sager and others (2013) present? Well, much of their argument is balanced on seismic profiles of the oceanic crust around Tamu Massif. Research vessels mapped the ocean floor and ran seismic profiles by shooting an airgun in the ocean to produce artificial seismic waves that would reflect off materials within the crust -- something that oil companies do all the time to find new prospects. The above map shows the locations that these profiles we made -- as as you can see, they only sample a very small portion of the area in question. Now, the seismic profiles that are constructed are tricky because the data you get is relatively low resolution and doesn't usually present an unique solution (see below). They need to be interpreted and by no means is that a straightfoward job. One thing that helps is to have some drill core of the crust in the area to compare to determine what materials might be reflecting your seismic waves. Once you decide what is reflecting (and what isn't), you start drawing lines on the profile to define the layers, in this case lava flows.