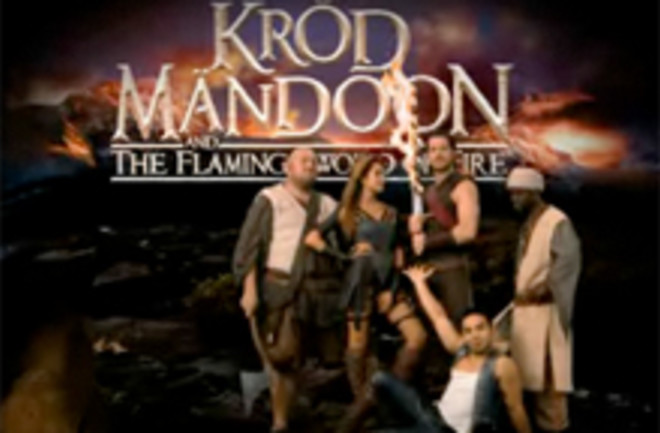 We don't normally cover fantasy on Science Not Fiction, but I thought I'd make an exception for tonight's premiere of Kröd Mandöon and The Flaming Sword of Fire on Comedy Central at 10/9c. If Monty Python and the Holy Grail or Bored of the Rings are your thing, this new parody of the fantasy genre is worth a look. In Robin Hood fashion, the insecure hero, Kröd Mandöon (played by Sean Maguire), leads the struggle against the evil rule of Dongalor, a local king with big ambitions. Kröd is aided by a none-too-bright pig-man, an utterly ineffective wizard, the very gay Bruce, and his sexually liberated pagan warrior girlfriend. (A note on these last two characters—there's a very fine line between ironically parodying how women or homosexuals are portrayed in a genre, and simply exploiting stereotypes anew. Once established, I hope these characters are given room to grow.) Not surprisingly, the funniest character so far (I've only seen the premiere episode) is the villainous Donglar, played by Matt Lucas of Little Britain fame. Lucas chews up the scenery, and plays perfectly off his trusted advisor Barnabus, the closest thing the show has to a straight man. It'll be interesting to see if the show can sustain the humor of its premise over the course of an entire series, but I'm looking forward to seeing how these characters play out.