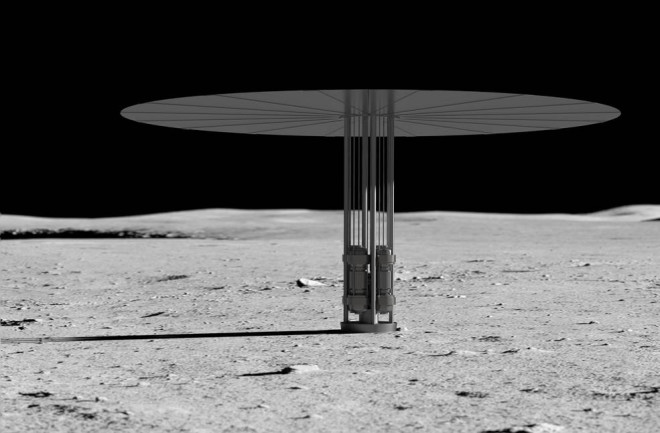 The Kilopower small nuclear reactor could be tested on the moon in the coming years. (Credit: NASA)

The future of space exploration may rest in the hands of a group of Los Alamos National Laboratory researchers. They’ve built the first of a new generation of small nuclear reactors intended to power missions to deep space and even future astronaut bases on the moon and Mars.

Called Kilopower, their project aims to achieve a longstanding dream of the space community: a safe, effective, and powerful nuclear power reactor that can power spacecraft for years.

“I don’t think we can expand into deep space without nuclear power, which is what’s made me so passionate about developing the technology,” says David Poston, who leads the Kilopower team.

For example, NASA’s New Horizons probe that flew past Pluto in 2015 and is heading to another Kuiper Belt Object later this year, runs on just 228 watts of power. The Curiosity rover uses around 110 watts. And the long-running Cassini probe that plummeted into Saturn last year used three RTGs to run 885 watts at the beginning of its mission and around 660 by the end.

Kilopower, on the other hand, will be able to achieve kilowatts of power — that’s enough to run more advanced spacecraft or entire space settlements.

The device would also run on uranium isotopes, which are abundant, rather than Plutonium-238 — the nuclear fuel used in weapons that needs to be cultivated carefully in a lab. And beyond simply bigger space missions, the tech could also enable spacecraft with longer lifespans and a greater array of instruments. And those same qualities make Kilopower ideal for the upcoming moon bases proposed by the Trump administration, the team believes.

“NASA’s been looking for a technology demonstration mission,” says Patrick McClure, co-lead of the Kilopower team. “Currently, because of the administration’s interest in the moon, it looks like the test would be landing this on the moon as part of a mission.”

One drawback of the reactor, like any nuclear reactor, is that it would need a little time to power up to full capacity, so many missions might need a complimentary power source at the beginning, like solar. But once the reactors are online, the team says they can run near full capacity for at least 15 years. And while there’s a little uncertainty beyond that, it could go well beyond.

Engineers on the Kilopower project, shown here are Marc Gibson, Kilopower lead engineer, and Jim Sanzi, Vantage Partners, work on the assembly at the Nevada National Security Site ahead of a test in 2018. (Credit: NNSS)

Engineers on the Kilopower project, shown here are Marc Gibson, Kilopower lead engineer, and Jim Sanzi, Vantage Partners, work on the assembly at the Nevada National Security Site ahead of a test in 2018. (Credit: NNSS)

Back in March, the reactor completed a successful test, called KRUSTY — or Kilopower Reactor Using Stirling Technology. (As a Simpsons fan, Poston says he’s also got acronyms for MAGGIE, MARGE, DUFF, and MONTY.) By the mid-2020s, Poston and McClure think their nuclear reactor could be mission ready.

And beyond that, it could eventually being folded into propulsion systems using ionic energy, like those aboard the Dawn mission at Ceres, which could allows for unconventional methods of space travel. (The ion thrusters enabled Dawn to orbit Vesta, detach from orbit, then move over to Ceres.)

Both also believe that nuclear fission power is the future of spaceflight — one that’s been talked about, but never executed, since the beginning of the space age.

“My goal in life has been to get a reactor in space before I retire,” McClure says. “That’s my only goal here.”