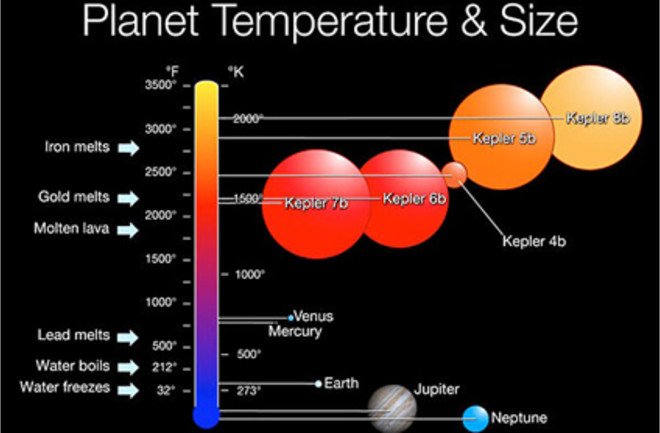 NASA's new eye in the sky has spotted the first handful of what it hopes will be a flood of new exoplanets. The Kepler telescope, launched last year with the express purpose of planet-hunting, has found its first five new worlds, with the results forthcoming in the journal Science this week. Just don't get any ideas about living on any of them.

"One of the planets is amazingly light - like Styrofoam," said William J. Borucki, the astronomer from NASA's Ames Research Center.... "And all five simply glow," he said, "they're like looking into a blast furnace - but that's simply no place to look for life" [San Francisco Chronicle]

. The scalding-hot planets measure in excess of 2,000 degrees Fahrenheit, hotter than molten lava. These planets all orbit their stars in a hurry, taking between three and five days to make a circuit. Ground measurements confirmed Kepler's findings. Four of the five exoplanets—including Styrofoam world—are mysteriously light; they're far less dense than Jupiter despite being 40 percent larger, as you can see in the chart.

"This is accumulating evidence that low density is a common feature" among exoplanets, says planetary physicist David Stevenson of the California Institute of Technology in Pasadena, who was not involved in the research. The problem is that no one has come up with a mechanism that could puff up an exoplanet that way [ScienceNOW Daily News]

. Kepler's first foray found more than just new planets. It also measured the light from 43,000 stars like our sun in its field of view and found two-thirds of them to be about as stable as the sun.

That seemingly obscure observation suggests that the majority of stars potentially are as hospitable to life as Earth's sun, assuming there was an Earth-like planet orbiting at the right distance from the star [Christian Science Monitor]