Kate Gosselin before & after! 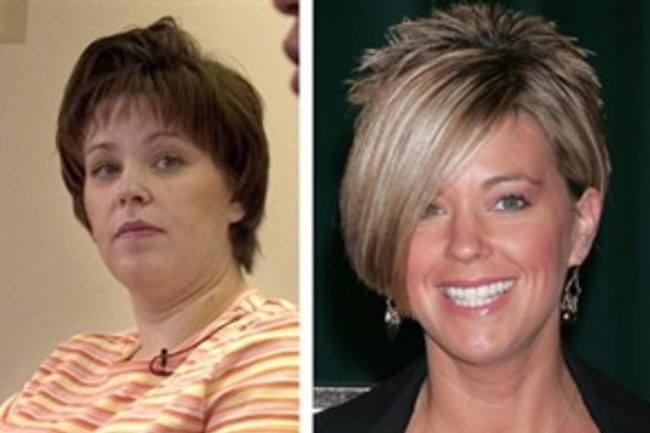 I was at the supermarket today and saw some some before and after pictures of Kate Gosselin on the cover of Us Weekly. Pretty crazy, though not as extreme as some of the "pre" and "post" makeup photos of celebrities you always see in Star. I don't know much about the show but I get really interested in the couple's story whenever I'm at at the supermarket (Us Weekly should be renamed The Gosselin Weekly). Now whenever I randomly run across a story about the Gosselins on the internet Fuji apples come to mind. On a somewhat genetically related note some people have commented that it's peculiar that the Gosselins' offspring look so Asian when they're only genetically 1/4 Asian. Jon Gosselin's mother, who is ethnic Korean from Hawaii, chalked it up to the dominance of Korean genes apparently. It seems to me that Jon Gosselin is relatively Asian looking for someone who is Eurasian, so I am not that surprised that his offspring look more Asian than one might expect. But, they're all very young, and many people look more Asian as babies than they do as adults. For example, the epicanthic fold that is common among adult East Asians is a trait which many non-East Asian infants, toddlers and children retain. Phoebe Cates, Keanu Reeves and Dean Cain seem more typical in appearance for someone who is 1/4 East Asian & 3/4 European in ancestry. The former is discernible, but not dominant, in their in adult appearance. Note:Us Weekly original image source.