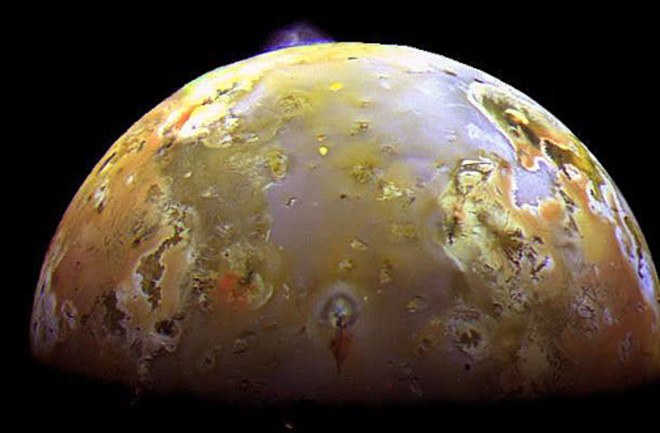 Io is one of the most fascinating objects in the solar system - well, at least it is to me. Sure, it isn't the sort of potentially life-haboring moon like Europa or Enceladus, but it might be the most geologically active body around. Much of the surface is made of recent volcanic deposits, whether it is ash, tephra or lava flows from one of the hundreds of volcanic vents on the surface of the moon, whose surface area is only 8.2% of the Earth's. Based on observations of Io from Galileo and the Voyager missions, there are at least 27 persistent volcanic features on Io and hundreds of small volcanic features, some of which produce plumes that tower 300 km over the surface of Io. That height is remarkable by Earth standards, where the tallest plumes (ultraplinian) reach 60+ km. However, remember that the height of a plume depends on factors like gravity, rate of eruption, atmospheric density, particle size and more. So, with the lower gravity and thinner atmosphere at Io, you would already expect taller plumes, all things being equal. And they clearly aren't equal. A new study in Icarus by Veeder and others (2012) produced a map of point sources of heat on Io's surface (see below) - likely active volcanic vents or places with magma near the surface. The "pizza pie" surface of Io appears to be scalding hot - even before this map, the estimates for the total heat flow from the surface of Io is 61 x 10^12 W, giving an average of ~1.46 W/m^2. Compare that with the average heat flow of 0.075 W/m^2 for the surface of Earth and we're looking at an average Ioan heat flow that is almost 20 times higher than the terrestrial average. This new map shows what some of the point values for heat flow are on Io - with the small, blue circles representing only 1-10 GW heat flow and the big, black circles representing >10,000 GW. Here's the kicker: If you think about some of the highest heat flow on Earth - maybe Yellowstone Caldera - we're talking maximum heat flows at the surface of 10,000-40,000 mW/m^2. Now, to get our units to be even so we can compare directly, a mW is 10^-3 W, while a GW is 10^9 W, so the Yellowstone heat flow, converted to W is ~10-40 W/m^2 (roughly the same as the average Ioan value). The low end of the point sources on Io are ~1 to 10 billion W and the high end? We're talking a quadrillion W. If we make a rough (and I mean rough) estimate of the total heat flow from Earth by taking the surface area (5.10 x 10^14 m^2) and multiplying it by the average terrestrial heat flow, you get ~3.8 x 10^13 W. One of the single black circles, like Loki Patera, on Io is ~9.6 x 10^12 W by itself.

So, why is Io so darn hot? The likeliest cause is tidal forces - the pulling and tugging of the moon by the gravity of Jupiter. Io orbits at only 421,000 km from Jupiter, making a full orbit in ~1.76 days. That means that the moon is whipping around the planet and all of the innards of Io are being distorted as the gravity from Jupiter tugs at the moon at different parts of its orbit, causing changes upwards of 100 meters (vs. Earth that only get, at the very most, up to 30 cm). This distortion causes heat through friction, thus causing Io to stay hot (and partially molten). There are likely also radioactive elements like uranium, thorium and potassium in Io's rocks that add to that heat (and are the main source of heat for Earth), but thanks to Io's small size, the role of radioactive elements and conductive loss of all the heat from Io's formation are negligible. You can see the effect of this tidal heat on other of the Galilean moons of Jupiter - Europa, Ganymede and Callisto. The further you get from Jupiter, the less the surface of the moon looks to have been resurfaced by geologic processes such as ice tectonics/volcanism on Europa. This is likely because there isn't sufficient heat caused by tidal friction when you get out to the orbit of Callisto at 1,882,000 km from Jupiter. However, Veeder and others (2012) study on Io's heat flow suggests that tidal forces might not be the only source as the models for how tidal forces would heat the moon don't agree with these new measurements. Additionally, the volcanoes on Io only account for 60% of the total heat loss predicted, so either the models are wrong or Io is losing heat in another, currently-unknown fashion. Using this heat flow data, Veeder et al. (2012) speculated on the nature of volcanism on Io, suggesting that "outburst eruptions" produce lava flow fields (possibly like terrestrial flood basalts), while dark patera (calderas) like Loki are "near-surface intrusions, where thermal interaction and the mobilization of volatiles leads to the un-roofing of the silicate bodies". That should sound awfully similar to discussions we've had here recently on caldera eruptions on Earth like Long Valley in California. So, very alien moon, but remarkably similar magmatic processes. Sadly, none of this makes Io the "prime target" for the next big NASA mission to Jupiter - the call of life on Europa beckons the masses much more than volcanic features on a likely lifeless moon. However, being able to watch the evolution of Io's surface over a year - at high resolution - could yield some fascinating result into how large-scale volcanism might have looked in the early (geologically active) early solar system. Reference Veeder GJ and others, 2012. Io: Volcanic thermal sources and global heat flow. Icarus, v. 219 (2), p. 701-722.