Just How Dark Were the Dark Ages?

After the fall of the Roman Empire, Europe wasn’t quite the horrible and backwards place earlier historians would have you believe. Modern scholars now look at the Dark Ages in a whole new light. 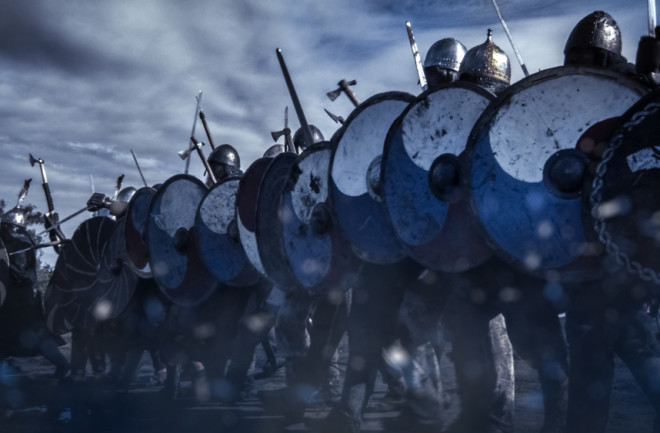 Whether it’s the idea of barbarian hordes run amok across a continent ruled by the Romans for centuries, or the notion that science and the arts went through a 300-year freeze, the concept of the Dark Ages has always titillated the imagination.

In truth, a big part of what makes the era dark to modern eyes is the relative lack of surviving information. But what we don’t know has always been at least as interesting as what we do know. Did King Arthur really exist, let alone send his knights on a quest to find the Holy Grail? Was there ever a legendary hero named Beowulf, and how long had his story existed before the oldest known surviving manuscript appeared in roughly the 10th century?

Of course, the Dark Ages also refers to a less-than-heroic time in history supposedly marked by a dearth of culture and arts, a bad economy, worse living conditions and the relative absence of new technology and scientific advances. While the period continues to fascinate history buffs, scholars and fantasy fans looking for some tangible link to their favorite mytho-historical heroes, the term “Dark Ages” has largely fallen out of use among serious researchers, due to some of the implications and assumptions made by those who first propagated its use.

“No academic uses it today — because it’s actually one of the most fascinating and vibrant periods about which we are discovering new knowledge every year,” says Julia Smith, a professor of medieval history at the University of Oxford’s All Souls College.

Let’s take a closer look at those aspects of the period that scholars typically refer to now as the Early Middle Ages to separate, the dark from the light.

Shadows of the Empires

The origin of the term “Dark Ages” is itself a little murky in the historical record, but typically it was used in contrast to the praise heaped on the shining cultural achievements of the Greek and Roman empires, compared to the knowledge and culture that existed after their decline and fall.

This concept carried on into the Age of Enlightenment, when many scholars of the day pointed to the great architectural achievements of the Romans and compared them to a return to simpler wood structures of the following period, says Alban Gautier, a professor of medieval history at the University of Caen-Normandy in France. The idea of a dark, barbarian period was also pointed out in contrast to 19th century civilizations in Europe and America.

“This phrase is deeply steeped in the 19th century western European idea that some civilizations are superior to others, which today sounds very difficult to hear,” Gautier says.

Gautier believes the term still has some use in a strictly academic sense — particularly as it applies to historians. While the Romans were excellent record keepers, historical texts and documents are comparatively scarce starting with the 5th century and for several hundred years thereafter.

But Gautier points to notable exceptions. After the Roman apparatus collapsed, taking with it many of its institutions, such as secular schools, the Catholic Church stepped in to provide some form of learning and scholarship in many parts of Europe.

“The Church in western Europe and all the regions north of the Mediterranean becomes the biggest element of stability,” he says. Monks worked to copy much of the literature and scientific texts of the Roman period, and to a lesser degree the Greek period.

“Of course they had a religious agenda, but in order to forward this agenda, they had to know Latin,” Gautier says. “Knowing Latin grammar meant keeping knowledge and learning from the Latin texts.”

Meanwhile in England, the absence of many works of significant writing dating to this period doesn’t mean society was idle. In fact, some of the most enduring legendary characters of England emerged in this period. In what’s attributed to a 6th century Welsh poet, the earliest known reference to England’s most famous heroic monarch comes in a form of comparison, when the poet describes a warrior who killed many people, but noted that this fighter "was no Arthur," says Bryan Ward-Perkins, a professor at the University of Oxford and author of The Fall of Rome and the End of Civilization. And while the oldest written poem of warrior Beowulf dates roughly to the 10th century, some scholars believe the legend was taken from oral traditions that date back far earlier.

Another common characteristic associated with the Dark Ages is the relative lack of monumental architecture. Towns and cities no longer built large new stone structures. And the slow deterioration of Roman infrastructure such as aqueducts likely had an effect on quality of life in cities, Gautier says.

Populations of major cities like Rome and Constantinople shrank in this period. But Gautier believes rural life may have actually improved, especially in the largely bucolic British Isles. During the Roman period, farmers would have had to pay regular taxes to support the empire and local cities. But as administration fell apart, the tax burden likely diminished.

“The cities and the towns were smaller. It was less necessary for farmers to produce and work a lot in order to feed the cities,” Gautier says.

But Ward-Perkins says that archaeological evidence does suggest some scarcity of resources and goods for common people. “The other way it might be dark is just the lack of evidence, which is probably a symptom of economic decline,” he says. By 450, the evidence of simple day-to-day items such as new coins, pottery or roof tiles largely disappeared in many parts of Europe, and wasn’t found again until roughly 700.

As for the claims that societies took a step back in terms of science and understanding during this period? While it’s true that western Europe didn’t show as many achievements in technology or science in the Dark Ages as it would demonstrate later, those shortcomings were countered by an explosion in culture and learning in the southern Mediterranean, with the first few Islamic caliphates.

Europe itself did maintain some practical technology, such as watermills. In terms of learning, Isidore of Seville, an archbishop and scholar, created an encyclopedia of classical knowledge, much of which would have been otherwise lost, in his massive Etymologiae. The relative isolation of the British Isles also allowed people there to develop unique styles of jewelry and ornate masks, Ward-Perkins says. Some of these can be found today in the archaeological excavation of graves of Sutton Hoo in eastern Anglia, which included a Viking ship burial.

“The relative dearth of written sources is more than counterbalanced by the huge amount of archaeological evidence,” Smith says.

While the Dark Ages may have started with the fall of the Roman Empire, the Medieval period, around the end of the 8th century, begins to see the rise of such leaders as Charlemagne in France, whose reign united much of Europe and brought continuity under the auspices of the Holy Roman Empire.

Although most scholars would agree that the so-called Dark Ages represent a distinct period throughout most of Europe, many of the assumptions that first made that term popular are no longer valid. Even the most persistent idea that the period represents one of violence, misery and backwards thinking has been largely disproven.

“The idea that’s completely out of fashion these days is that it was dark because it was morally worse,” Ward-Perkins says. But these days, he notes with a touch of dark humor, “everybody pretty much accepts that humans are pretty horrid all the time.”