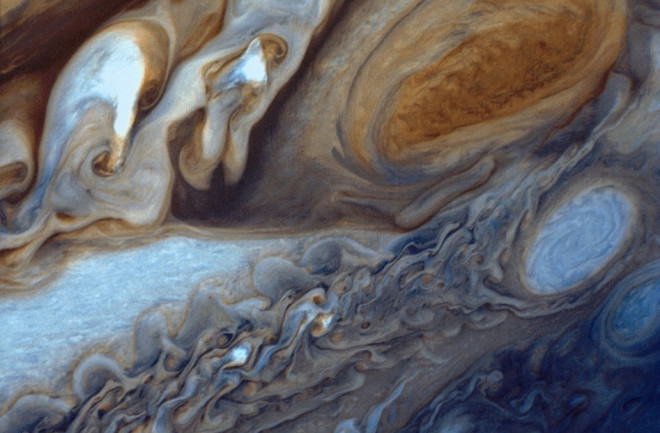 (Credit: NAS /ESA/HST) Talk about extreme weather. The solar system’s biggest and baddest storm, Jupiter’s Great Red Spot, is so loud and violent that it heats up the giant planet’s atmosphere. Above the storm, which has been raging for at least 300 years, the atmosphere is hundreds of degrees hotter than anywhere else on Jupiter. The warmth comes from within, according to a paper published in Nature today.

So Hot in Here

Orbiting hundreds of millions of miles from the sun, Jupiter is about three times toastier than it’s expected to be without some extra source of warmth. Sunlight at Jupiter is 25 times dimmer than it is at Earth, which means the sun can’t be enough to warm the planet’s atmosphere to the temperatures scientists have measured. Jupiter has powerful auroras at its poles, and they can create electrical storms that heat the atmosphere. But their warmth would mostly stay trapped at higher latitudes, thanks to the Coriolis effect on a fast-spinning world (Jupiter’s day is just shy of 10 hours long). So that can’t explain it, either. “This warmth is a discrepancy that has haunted everyone for 50 years now,” says James O’Donoghue, a planetary scientist at Boston University.

The Heat Is On

To figure it out, he studied the Great Red Spot in great detail using the 3-meter NASA Infrared Telescope Facility at the Mauna Kea Observatory. A spectrometer split up the light Jupiter reflects, which allowed him to scrutinize Jupiter’s howling winds. He and colleagues think the atmosphere’s own turbulence may be heating things up.

Above the Great Red Spot, Jupiter's atmosphere is hundreds of degrees warmer. (Credit: Dillon Yothers with Luke Moore) While the Great Red Spot twists and rages, it causes turbulent flows of gas in Jupiter’s upper atmosphere. The turbulence causes two types of waves to form: gravity waves and high-frequency acoustic waves. Gravity waves are akin to the vibrations of a guitar string when it’s plucked. Acoustic waves are compressions of the air, just like any other sound. About 500 miles above the spot, these waves collide and release energy, like ocean waves crashing on a shoreline. “It’s not thunder heating, which I would have loved to be able to say,” O’Donoghue says. “It’s kind of the same as sound waves, but I don’t think thunder is a good analogy, because we don’t know about the lightning.” No one has ever seen lightning at Jupiter's Great Red Spot, although it could just be deep within the planet and invisible to us, he adds. O’Donoghue measured above and around the Great Red Spot, and didn’t find any extra sources of heat. That means it must be coming from underneath the storm, he says. As it turns out, the source is something Jupiter has in common with Earth, where atmospheric turbulence can also heat things up. On Earth, tsunami, volcanoes, storms and earthquakes can all shake up the atmosphere and warm it, by generating high-frequency acoustic waves that get stronger as they move higher into the atmosphere. Even passive mountains can do this. Erratic wind gusts blowing over bumpy terrain can create hotspots, sometimes hundreds of degrees warmer than the air a few miles away. Jupiter doesn’t have mountains, but it has enough internal turbulence —especially in the Great Red Spot — to create the same types of waves.

To measure its temperatures, O’Donoghue’s team specifically looked for a molecule called H3+, which is a hydrogen molecule with three protons and two electrons. It’s found in the upper atmospheres of all the gas giants in our solar system. By using a spectrometer to study that molecule, O’Donoghue could measure temperatures, discovering that the atmosphere above the storm was hundreds of degrees hotter. If the warmth does originate from below the storm, that’s a clue that Jupiter’s upper and mid-atmospheres are connected, and can affect each other. This has never been demonstrated before, either. It could also solve the giant planet energy crisis, O’Donoghue says. “It’s difficult to stretch the conclusion too far to other planets, but if it’s true at Jupiter, it could be true elsewhere,” he says. “This problem still remains after so long, and it does need a very, very large input of energy, from a seemingly invisible source.” Meanwhile, observations during the past few years show the storm itself is shrinking. A smaller, potentially weaker storm could create less turbulence, and theoretically less warming, too, but it’s not clear yet, O’Donoghue says. “I hope it doesn’t shrink too much so we can’t understand it before it goes, because that would be a shame. But it looks like it’s large enough now for us to continue for a while,” he says.