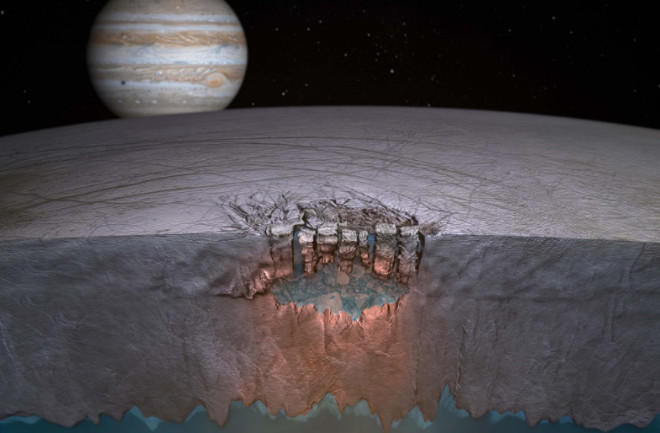 Europa, one of Jupiter’s four largest moons, has an ocean of liquid water beneath its icy crust. In the coming years, scientists hope to send probes to the world to study the chemistry of its ocean and look for possible signs of alien life. One challenge is figuring out whether radiation hitting Europa would tamper with potential chemical evidence of life.

Luckily, it seems scientists won’t have to worry too much about this. Jupiter’s presence shields Europa from many of the energetic particles that stream through space, researchers found using a computer model. Though some of these particles, called cosmic rays, will hit Europa, the radiation dosage from them is not significant, the researchers report in The Astrophysical Journal Letters. This means that chemicals in Europa’s ocean, and signs of life they might contain, would be intact for future study.

In 2018, planetary scientist Tom Nordheim of NASA’s Jet Propulsion Laboratory looked into radiation on Europa from Jupiter itself. He and his team found that energetic particles from Jupiter’s magnetosphere, a region marked by the planet’s magnetic fields, don’t reach more than a few inches below Europa’s surface.

But the gas giant isn’t the only source of energetic particles that shower onto the moon. Particles with even higher energies, called galactic cosmic rays, stream through the galaxy from the remains of dying stars.

So, to find out how cosmic rays might affect Europa’s ocean chemistry, Nordheim and his collaborators created a computer model. The model simulated how cosmic rays would collide into the atoms on Europa and react, destroying these atoms and releasing further showers of particles. These collisions and reactions continue further into Europa until the particles no longer have enough energy for these reactions.

“I think that’s pretty exciting in terms of relatively pristine material being right below the surface,” Nordheim said. “You don’t have to dig incredibly deeply to find material that hasn’t been completely modified by radiation.”

This is one advantage of searching for signs of life on Europa compared to searching on Mars, Nordheim said. Mars doesn’t have a strong magnetic field to protect its surface from energetic particles, so cosmic rays probably heavily affect its surface. Europa, on the other hand, enjoys the protection of our solar system’s largest gas giant.