Jupiter, not so up close and not so personal 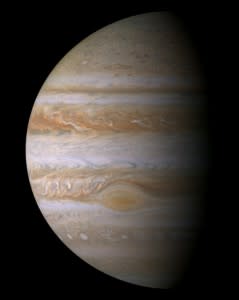 So you've probably heard that tonight, Jupiter is as close to Earth as it'll get in many years. While this is true, and pretty cool -- and I certainly don't want to damp enthusiasm for anyone wanting to go outside and see it! -- I want to make sure you understand what this means. First of all, this whole thing is happening because Jupiter is at opposition: that is, it's directly opposite the Sun in the sky. A better way to think of this is that the Earth is passing very nearly directly between the Sun and Jupiter, so from the Earth we see them on opposite sides of the sky. At this point, the Earth is as close to Jupiter as it can get for that particular orbit. Both Earth's and Jupiter's orbits are slightly elliptical, so sometimes Jupiter gets a bit closer to us at opposition than other times; this year is the best in decades. It's about 590 million km (355 million miles) away. That's still a pretty long way! But Jupiter is a big planet, 140,000 km (86,000 miles) across, almost 11 times wider than the Earth! It's also a whitish color, so it reflects a lot of sunlight. Its size, reflectivity, and close distance together make it a very bright object in the sky. If you go outside any time after sunset tonight you'll see it in the east, a luminous beacon glowing brilliantly. However, some people have been saying that tonight is the best night to see it, and we won't get a chance to see it like this again for years. Shades of the Mars Hoax! In reality, it doesn't matter if you go out tonight, or wait a few days. While technically Jupiter is closest right now, it's not like it'll be a lot farther away tomorrow night. Here's why. Jupiter takes about 12 years to go around the Sun, while Earth takes one. So we can assume Jupiter isn't moving at all for the moment. If Jupiter, the Earth, and the Sun all lie on a line tonight, then tomorrow night Earth will have moved a little bit off that line (so will Jupiter, but much less). Using a little trig, I was able to figure out that the distance the Earth has moved away from Jupiter in one day is about 23,000 km (14,000 miles). That's not a whole lot compared to Jupiter's vast distance. Adding an additional 23,000 km is really a piddly amount. Even with a big telescope it would be almost impossible to measure any difference! So if you go out tonight, or tomorrow, or in October, by eye you won't see any difference. But don't let that stop you! Even through a pair of binoculars Jupiter is a magnificent sight: you can easily spot its four big moons, first discovered by Galileo almost exactly 400 years ago, and you can even spot one of Jupiter's dark bands on its cloud tops (the other disappeared months ago, but may reappear any time). As an added bonus, Uranus is not far from Jupiter right now; I spotted it easily the other night using just my binoculars. It appears as a pale bluish-green star near the bigger planet. Star charts for this aren't easy to find, but I went to YourSky, put in my latitude and longitude, then clicked on the link for Uranus in the planet table displayed. That might help. So maybe the bad news is you can't see any difference in Jupiter tonight and tomorrow night, but if you go and see it tonight you'll know it's a teensy bit closer than it was yesterday, or will be tomorrow. And the good news is that if it's cloudy where you are, it won't matter much to wait a few days! In fact, in a few weeks Jupiter will be up higher at sunset, and easier to observe earlier. So this is win-win! Get outside when you can and take a look at this mighty planet, and remember that even though it's so far away, it's still an incredibly bright and beautiful sight in the night sky.

The SciencesTen Years in the Life of the Sun, Up Close and Personal
Recommendations From Our Store