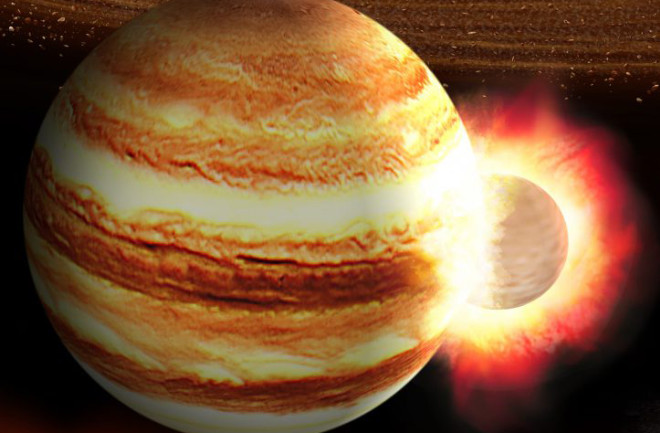 In 2016, NASA’s Juno spacecraft arrived at Jupiter with the goal of peering through Jupiter’s dense clouds to reveal the giant planet’s inner secrets. Along with the stunning pictures Juno has sent back, it’s also used its instruments to gaze deep into Jupiter’s heart.

One of the spacecraft’s biggest discoveries was a core less compact than scientists expected. Instead of a sharp transition between a dense core and the more gaseous outer layers, Juno’s readings imply a fuzzy boundary, with the core bleeding into the atmosphere out to nearly half the planet’s radius.

Now, astronomers led by Shang-Fei Liu from Sun Yat-sen University in China have put forward an explanation for that fuzzy core: the young proto-Jupiter was involved in a head-on collision with a large proto-planet, roughly the size of Uranus. Modeling shows that even if the event happened 4.5 billion years ago, when the planets were still forming, the fuzzy core that resulted could persist today. Liu and colleagues published their findings August 14 in the journal Nature.

The most common story of Jupiter’s formation is that it collected its heavy elements first, forming a dense core. At that point, it was heavy enough to attract the massive amounts of lighter hydrogen and helium gases that make up most of its bulk, and did so prodigiously.

But that scenario would result in a modern Jupiter with a compact, dense core surrounded by lighter gases – which is what planetary scientists thought it had for many years. It took Juno’s extremely precise gravity measurements to learn that Jupiter’s core is actually fuzzy, with the outer core bleeding into the gas around it for thousands of miles. That finding was a shock to astronomers when Juno scientists first reported the finding in 2017.

For that fuzzy core to occur naturally, scientists say that some 10 to 20 Earth masses of heavy materials would had to have glommed onto Jupiter after the core finished forming and after half its gas envelope had already developed. But this is physically unlikely – once Jupiter started gaining an atmosphere, it should have done so quickly, and that very atmosphere would have repelled heavier dust grains from settling onto the planet.

So scientists began considering how else Jupiter’s fuzzy core might have formed, and Shang-Fei Liu presented the idea of a massive collision in Jupiter’s past. Specifically, that a proto-planet some 10 to 20 times the size of the Earth, made of reasonably dense materials, crashed head-on into Jupiter’s core at some point early in the gas giant’s history.

“It sounded very unlikely to me,” said Andrea Isella, a co-author on the paper, in a statement, “like a one-in-a-trillion probability. But Shang-Fei convinced me, by sheer calculation, that this was not so improbable.”

For one thing, it’s becoming more and more clear that the early solar system was a violent place where planetary collisions were fairly common. And Jupiter’s heavy mass acts almost as a guidance system, meaning head-on collisions are actually more likely than glancing blows, if an object veers close enough.

Liu’s modeling also showed that if such a large, head-on impact occurred, it could indeed take billions of years for the core to settle back down again, well within the current lifetime of the solar system.

While there’s no way to run the clock backwards and be certain a major collision is what caused Jupiter’s fuzzy core, the theory holds for now, and is an intriguing explanation for Jupiter’s otherwise mysterious center.