Jupiter: bringing the hammer down

One thing I've leaned over the years is that the Universe goes on, even if you're at Comic Con. In this case, I think we can say beyond any reasonable doubt that Jupiter suffered a major impact recently. I was wary at first, and maybe still wavering a bit even later, but now there's no question at all. Why? Because of this image from the giant Gemini North telescope: 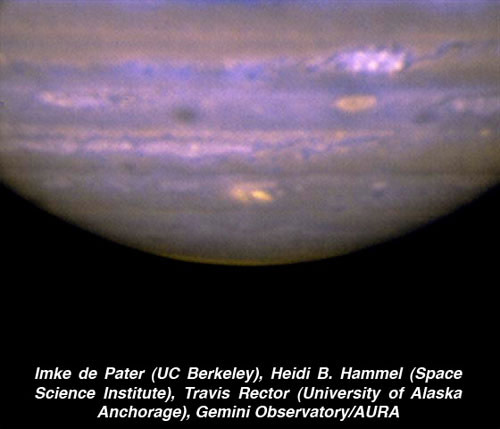 Bang! We're done arguing. This image was taken at 18 microns, well out into the infrared where what you're basically seeing is heat. There are spots and things on Jupiter's cloud tops that are visible, but the impact feature in the center of the frame is obvious. 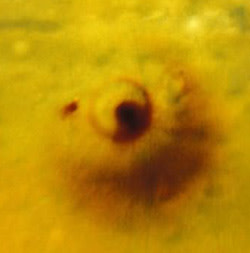 The reason I'm so sure now is that this looks almost exactly like the images returned after the comet Shoemaker Levy 9 broke into dozens of pieces and repeatedly slammed into Jupiter 15 years ago. Here's a Hubble image (right) of that event for comparison. You can see the the splash pattern is just the same, indicating the trajectory of the incoming debris. Some people have asked how you can get a feature like this when Jupiter has no solid surface. That's a fair question! The impactor is probably a chunk of rock or ice a mile or so across. It's moving very quickly, probably at 100 or so km/sec (60 miles/second). That gives it a HUGE amount of kinetic energy, that is, energy of motion. Still, as it passes through the upper atmosphere of Jupiter, where gas is thin, not much happens. But as it drops down the air gets thicker, and at those speeds the pressure on the incoming rock is enormous. As the gas in front of the meteor compresses, it heats up a lot, the same way a bicycle pump heats up when you use it. But in this case the gas gets heated to thousands of degrees, and glows. The pressure on the rock starts to flatten it out (scientists call this "pancaking"). The rock starts to break up, and then each one of those pieces compress and heats the air in front of it, pancakes, and breaks up, forming even smaller pieces, and so on. In a few seconds, this cascades into a vast amount of energy released essentially all at once. That is what scientists call "a whopping big explosion" (sorry to get technical on you here). So you don't need a physical impact with solid ground to get a detonation, you just need lots of pressure, and that's easy to come by with Jupiter and things falling on it from space. And that's why we see this huge impact scar. The explosion vaporized the incoming rock, and that debris blasted upward and rained down on the cloud tops, discoloring them. It also carved out a giant hole in the clouds, revealing lower atmospheric layers in early pictures, and blasted up material from lower down as well. This debris can float on the cloudtops for weeks and months, which is what happened in 1994 with SL9. I have a lot more details about all this in the first chapter of my book, I'll add. Remember, too, that this event was spotted after it was all over and all that was left in the visible light images was a black spot... and also remember that this was spotted by an amateur astronomer! Astronomy is one of the few fields where unpaid but extremely capable people can make a huge (no, I won't say "impact") contribution. Congrats to everyone involved for catching this rare event early enough to make more observations and detailed scientific analysis possible! Image credits: Imke de Pater (UC Berkeley), Heidi B. Hammel (Space Science Institute), Travis Rector (University of Alaska Anchorage), Gemini Observatory/AURA; NASA.