On December 21, Jupiter and Saturn will appear closer in Earth’s night sky than they have since 1226 A.D. You can watch the event live here, courtesy of Lowell Observatory. 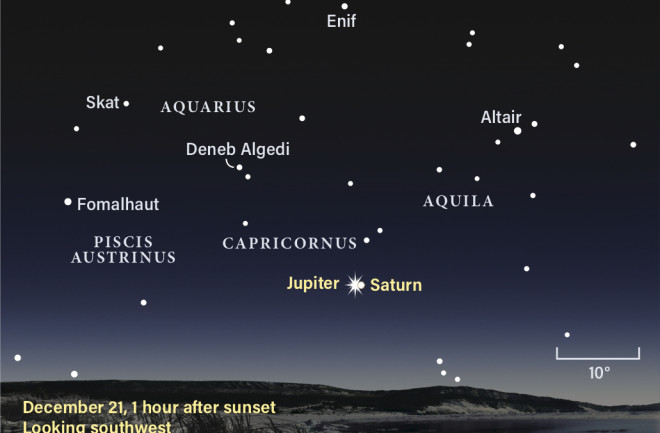 On December 21, Jupiter and Saturn will get so close in the sky that they will almost appear to merge with one another. Such a conjunction has not occurred in December for some 800 years. (Credit: Astronomy: Roen Kelly)

This December, Jupiter and Saturn will put on a show for skygazers that hasn't been seen in roughly 800 years. Astronomers are calling it the Great Conjunction of 2020. On December 21 — coincidentally the winter solstice — the two largest planets in our solar system will appear to almost merge in Earth’s night sky.

During the event, Jupiter and Saturn will sit just 0.1 degrees apart, or a mere one-fifth the width of the moon. The sight will likely leave many casual observers wondering "What are those large, bright objects so close together in the sky?"

In fact, Jupiter and Saturn will be so close that you will be able to fit them both in the same telescopic field of view. That’s an incredibly rare occurrence. The last time Jupiter and Saturn were this close together was in 1226 A.D., at a time when Genghis Khan was conquering large swaths of Asia, and Europe was still generations away from the Renaissance.

Humanity won’t have to wait quite as long to see the solar system’s two largest planets repeat this month's performance, though. Another Great Conjunction will occur in 2080. Of course, many of us alive today won’t be around then, so it would be wise to soak in this show while you can.

How to Find Jupiter and Saturn

For much of the year, Jupiter and Saturn have shared the same region of sky. The pair begin the month of December just 2 degrees apart, creating an already impressive sight. Now, you can find them both in the southwestern sky just after sunset, located some 20 degrees above the horizon at 6 P.M. local time.

By mid-month, they’ll be just one moon-width apart. On December 16, the moon will sit just 5 degrees away from the pair, offering a handy comparison. They’ll reach greatest conjunction on December 21.

Conjunctions happen when two celestial objects appear to pass close to one another as seen from Earth. Of course, those objects aren’t necessarily physically close, they simply look that way because of their orbital alignment.

Conjunctions are extremely common, though. Throughout the year, the moon regularly appears alongside a number of planets and bright stars. And two or more planets come together relatively frequently. However, having two bright planets like Jupiter and Saturn pair up is extremely rare.

On December 21, Jupiter and Saturn will have a "Great Conjunction" in Earth's night sky. The two planets will appear so close together that they'll almost look like one object. (Credit: Roen Kelly/Astronomy)

We don’t have to worry about that this time. Throughout the month, the gas giants will be hard to miss. Jupiter shines brighter than any star in the sky at magnitude -2.0, while Saturn is dimmer at magnitude 0.6 — though the Ringed Planet is still quite bright.

So, you certainly won’t need binoculars or a telescope to see the Great Conjunction of 2020. But if you do have observing equipment, you’ll be able to zoom in and watch the dance of Jupiter's four moons — Europa, Io, Callisto and Ganymede.

Then, without moving the telescope, you can slightly shift your gaze to Saturn and its magnificent rings. Despite the significant size difference between the planets, Saturn’s massive rings mean the two worlds both appear to have about the same diameter when viewed through a telescope.

As the conjunction reaches its climax on December 21, scopes located in the Eastern United States will be able to catch Ganymede as it transits Jupiter for three and a half hours starting at 7:04 P.M. EST. Meanwhile, telescopic observers on the West Coast will see Ganymede’s shadow hovering over Jupiter’s cloud tops by 9:40 P.M. EST.

You can watch a livestream of the Great Conjunction of 2020 below, courtesy of Lowell Observatory. Beginning at 7 p.m. EST on December 21, Lowell astronomers and educators will share spectacular live views of Jupiter and Saturn through observatory telescopes while discussing the nature of conjunctions.

No Astrological Meaning to the Sight

Seekers of celestial significance will likely see the whole event as some sort of sign related to the kind of year 2020 has been. But you don’t have to put any stock in astrology (nor should you) to revel in the astounding beauty of this conjunction.

As you enjoy the show this month, keep in mind that Jupiter appears brighter because it’s bigger and closer than Saturn. Jupiter sits just over half a billion miles away, while Saturn is roughly double that distance. So, as you look out at the two, you’re really staring down the barrel of our solar system and out into interstellar space.

This cosmic perspective is a precious reminder of our place in the solar system. And hopefully, it makes us all feel a bit closer and more connected to the outer planets, even if the pandemic has us feeling farther apart than ever before.