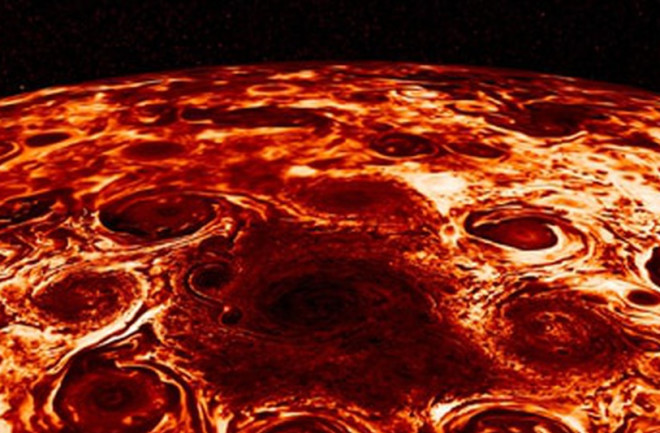 Jupiter may be one of the most recognizable sights in the solar system, but it still manages to surprise us. (And not just the everyday folks unfamiliar with its nighttime

With NASA’s Juno probe in orbit around the gas giant, we’re seeing a new side to the planet, answering some questions but raising others. The latest

came out last week at the European Geosciences Union General Assembly in Vienna, Austria, where researchers showed off twisty patterns of the north pole, the latest on Jupiter’s interior and the first ever view of an off-world’s magnetic field generator. As the probe has, let’s dive in!

The most dramatic findings may be Juno’s views of the north pole of Jupiter. Because it used infrared light, which plows through dust and other impediments to visible light, the probe’s data give researchers an unprecedented and penetrating view — up to 45 miles below the planet’s clouds. A spectacular and violent scene awaited them: a bevy of cyclones, 2500 to 2900 miles across, centered on the pole. NASA, slick as always, has turned the data into a quick jaunt over the 3-D rendered landscape. https://www.youtube.com/watch?v=nr5Pj6GQL2o

Part of the reason behind sending the Juno probe in the first place is to better understand Jupiter’s insides — its interior composition and structure. And while that work is still ongoing, mission scientists have figured out a big piece of the puzzle: how the interior rotates. Finally able to peer through the planet’s thick clouds, we now know the horizontal belts and zones that dominate Jupiter’s outer appearance, and which rotate at different speeds, go down about 1900 miles. (The planet is about 88,000 miles across.) Below that, the hydrogen dominating the different areas joins together and the whole lower atmosphere rotates as one.

Finally, the researchers also unveiled Juno’s up-close views of the dynamo, or engine, behind Jupiter’s strong magnetic field. Basically, the right kind of stuff, if set spinning, can generate a magnetic field

; that’s where Earth’s field comes from, and now we know much more about how Jupiter’s works. In a word, it’s weird. Irregularities pop up in the world’s magnetic field all over the place, and especially the northern hemisphere. One area is intensely positive, about halfway between the north pole and equator, but it’s right next to milder negative spots. The southern hemisphere, on the other hand, is pretty much all negative, and more intense the farther south you go. Again, NASA’s made a flashy video animating these findings. https://www.youtube.com/watch?time_continue=60&v=LPvfeOiKbm8 Juno’s been at Jupiter since 2016, and is currently funded through July 2018. With any luck, we’ll be able to figure out some of these questions — and have more new ones to ponder.