"In many ways, it's a new Jupiter," lead investigator says. 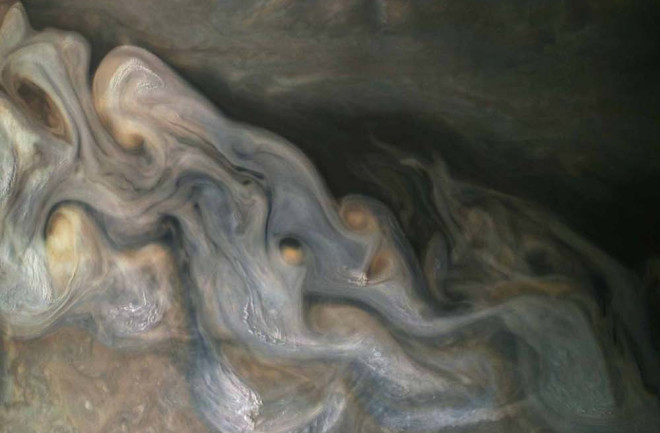 NASA’s ongoing Juno mission, revealing what lies beneath Jupiter’s cloud tops and in its atmosphere, has upended many long-held theories about the king of the planets. “In many ways, it’s a new Jupiter,” says Scott Bolton, Juno’s principal investigator at the Southwest Research Institute in San Antonio.

Many scientists had thought that by peering underneath Jupiter’s visibly divided outer layers, they would uncover a uniform, well-mixed planet. But according to a May study in Geophysical Research Letters, Juno has spied strong bands of what likely appears to be ammonia, indicating the planet is churning up material from its depths and implying a more active and variable world. The probe’s data also show polar regions swarming with unforeseen storms.

At the same time, Juno is busy sampling Jupiter’s magnetic field, which is stronger than expected in some places and weaker in others, astronomers announced in the May issue of Science. And the auroras that light up its atmosphere arise not just from charged solar particles slamming into the planet’s atmosphere, as on Earth, but from Jovian moons spewing material toward the planet.

So far, Juno’s discoveries raise more questions than answers, and scientists are eager to untangle them. “We’re slowly going to rewrite the book,” Bolton predicts.

Photos from Juno's orbit of Jupiter reveal amazing vistas. Above, the stormy dynamics of the Great Red Spot are visible during a low-altitude pass. | NASA/JPL/SWRI/MSSS/Björn Jónsson
1 free article left
Want More? Get unlimited access for as low as $1.99/month
Subscribe