Journey North: Tracking the Stories of Survival with Citizen Science 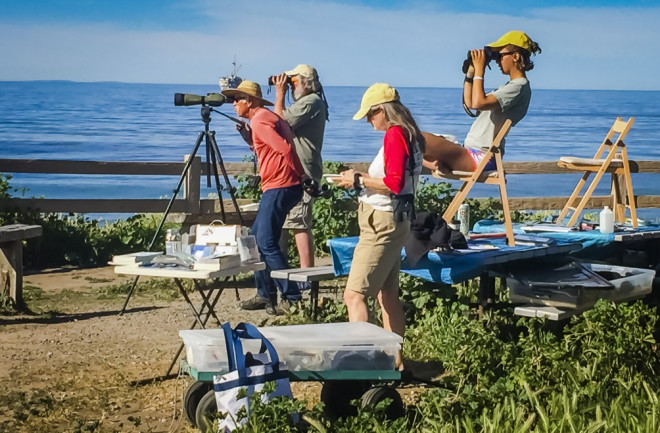 A group of Gray Whales Count volunteers count gray whales at Coal Oil Point in Santa Barbara. (ianvorsterphotography.com) It was a crisp morning following a cold night in Goleta’s Coronado Monarch Butterfly Preserve. As Luke crossed a beam that had been dropped across a swampy area, he looked up at the Eucalyptus grove and sighed quietly. “Where are the butterflies Dad,” he asked me—with one part expectation and one part disappointment. “They’re meant to be roosting up there in the leafy branches,” I motioned before adding, “hopefully.” But we didn’t immediately see any monarchs in the trees—instead we noticed a few on the ground, here and there. Our eyes became accustomed to the early morning gloom, and we realized an inordinate number of brightly colored insects were scattered on the ground throughout the grove. As we walked and photographed them, stepping carefully, I realized why so many were to be found there—with a windy night, many had blown off their perch; and with it also being a cold night, they had not been able to stretch their wings and fly. They were waiting for the caress of the first rays to erase the stiffness from their limbs. About two hours later, when the grove was bathed in a strong warm light, swarm after swarm began to burst into flight, not unlike the sudden release of a thousand balloons filled with helium. “Now I get it,” said Luke. This was what we had come to see—generations of golden-winged insects in a grove of grey-leafed trees—returned to where a generational lifecycle had begun. This migration was what inspired Elizabeth Howard to found Journey North in 1994. Her interest piqued by the early Internet-based projects in which school children tracked human expeditions, for example across the Arctic by dogsled, or Africa by bicycle, Howard saw what she describes as “a clear and exciting parallel between these expeditions, and the wildlife migrations that cross the globe with the seasons.” Both were for her, the ultimate survival stories. “The same challenges encountered on a remote expedition—changing weather, lack of food, insufficient time—have always challenged migratory species as they travel across the globe or pass through our own backyards.”

Monarch Butterfly on a log on a cold winter morning at Coronado Butterfly Preserve in Goleta, California. (ianvorsterphotography.com) Journey North tallies the first-of-year sightings of hummingbirds, robins, monarchs, blooming tulips and gray whales, amongst others. This month, the Gray Whales Count recorded 40 northbound whales on March 7 alone for a total of 266 so far, compared to 153 on for March 7, 2014. "We do not expect these numbers until maybe the fourth week in March,” says Michael Smith, the director of Gray Whales Count. “I don't know if it is population increase, great weather and observation ability, and/or whales deciding to use this route more than in the past. It's fun to speculate." Journey North offers an easy entry point to citizen science. They focus on high interest topics, a simple protocol, and real-world applications, which results in a large network of participants who are currently based at more than 50,000 sites across North America. They have two goals—scientific research and education, and the data is used as follows: Scientific - to document how migratory species respond to climate and the changing seasons. The long-term data set allows for valuable year-to-year comparisons, while also providing for real-time analysis. This is particularly useful for the question-generating step of scientific inquiry. With observers spread across a large range, unusual and remarkable observations are made that raise valuable questions. Education And Outreach - equally important is the educational and outreach components of the project. Journey North began as a school-based initiative, but over time, as citizen science and technology grew in importance, participation spilled over to the general public. Participation is now only 30 percent school based and 70 percent non-school. Elizabeth Howard says, “As part of our outreach effort, we produce weekly news for each featured species. The news is based on the data that citizen scientists’ contribute, as well as the descriptions and images they provide from the field. We incorporate comparative maps, graphs, and scientific analysis.” For educators, Journey North provides a rich array of resources, images, video clips, articles, activities, and lesson plans all of which enable teachers to build interdisciplinary studies into the curriculum. Journey North has published nine papers based on the monarch butterfly, and one on the ruby-throated hummingbird. “For monarch butterflies, our findings have revealed fall migration pathways to Mexico, the rate of spring re-colonization into the breeding grounds, and the variable presence of monarchs wintering in the U.S. Gulf coast states, for example,” adds Howard. “We also regularly provide data to scientists, resources managers, and conservation planners who need information about the spatial temporal dynamics of a species distribution.” This online effort today supports the program and lends Journey North the authority and authenticity that educators value.