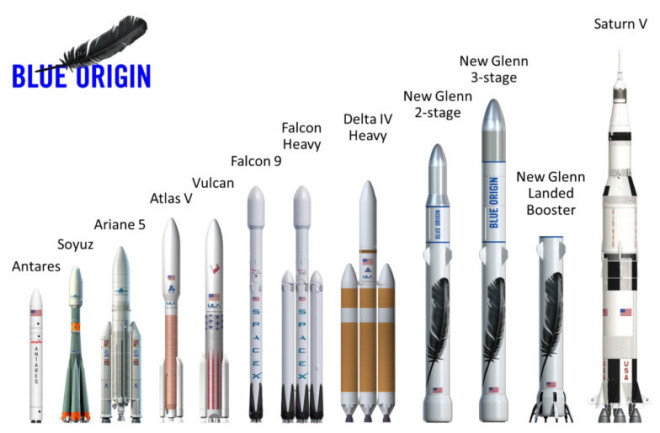 (Credit: Blue Origin) Blue Origin on Monday announced it's adding a bigger, badder addition to its future stable of reusable rocket boosters. The spacecraft, dubbed the New Glenn, is designed to provide the lift for missions into low Earth orbit and beyond, and comes in both two- and three-stage variants — the largest of the two will stand 313 feet tall. The first launch planned for the end of this decade, according to an email sent out Monday by Blue Origin CEO and Amazon.com founder Jeff Bezos. The rocket builds on the success of the company's New Shepard booster, which has now completed four trips to the edge of space and back, showcasing the upright landings that have become a staple of the modern-day space race.

The New Glenn craft, named for John Glenn, the first American to reach orbit, would be capable of the same gentle touchdowns as the New Shepard, allowing the company to reuse rocket boosters, cutting costs dramatically.

An artist's illustration of the New Glenn rocket. (Credit: Blue Origin) Unlike the New Shepard, the three-stage version of the New Glenn will possess enough lift power to carry heavy payloads, such as satellites and crew capsules, into space. Bezos says that the New Glenn will be ready to launch before the end of the decade. The New Glenn will use the company's upcoming BE-4 rocket booster, an upgrade to the current BE-3 model that powered the New Shepard. The rocket's main stage will contain seven BE-4 boosters strung together, yielding a total thrust of 3.85 million pounds at liftoff, Bezos says. That's more than any rocket currently operating today, although only a little more than half of the thrust that the space shuttle had, according to ArsTechnica. SpaceX's upcoming Falcon Heavy rocket is estimated to have about 5 million pounds of thrust.

While Blue Origin has thus far focused on sub-orbital tourist flights, Bezos is setting his sights much higher with the New Glenn. The new rocket should be able to deliver both satellites and human payloads into orbit, he says, aligning Blue Origin with other commercially-focused spaceflight companies like SpaceX and United Launch Alliance — a partnership between Boeing and Lockheed Martin. The rocket will launch from the new launch facility the company is building in Cape Canaveral, Florida, at the historic LC-36 launch pad. Bezos estimates that the booster should be capable of performing around 25 launches and landings, as opposed to most current rockets, which fall into the ocean after a single launch, creating prohibitively high costs to spaceflight. The upright landings that define both Blue Origin and SpaceX's missions are meant to cut down on expenses. Blue Origin claimed the title for the first rocket to reach sub-orbital space and touch back down safely back in November. However, both companies have completed multiple successful landings since then, although the process has not been without hiccups.