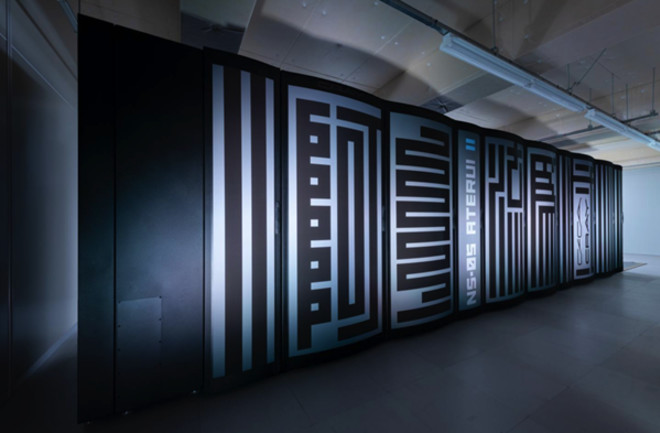 ATERUI II in the flesh at NAOJ’s Center for Computational Astrophysics. The design on the housing of ATERUI II represents an artist’s (Jun Kosaka) contemporary take on traditional Japanese block style lettering, spelling out the supercomputer’s nickname.(Credit: NAOJ)

One of the long-standing problems in astronomy is that you cannot hold the Sun. You can’t jump into it or examine it under a microscope. Nor can astronomers go back in time to witness the Big Bang or even step outside our own galaxy. Observations alone can only take the science of the stars so far.

Instead, today’s biggest astrophysical questions are answered through simulations carried out on supercomputers. That’s why the National Astronomical Observatory of Japan (NAOJ) just introduced ATERUI II, the world’s most powerful supercomputer dedicated solely to astronomy.

The Cray XC50 supercomputer, nicknamed NS-05 “ATERUI II,” was officially brought to life in June. This new iteration of the ATERUI supercomputer is three times more powerful than its predecessor, lending to its rank as #83 on the TOP 500 list of the world’s most mind-blowing machines.

With over 40,000 total processing cores, ATERUI II can perform up to 3 quadrillion operations per second (that’s one followed by 15 zeros). In addition to its performance, it has a whopping 385 Terabytes (TB) of memory (the term “memory” here refers to RAM, or random access memory). To put this in perspective, the newest Macbook Pros have just 6 cores and 32 Gigabytes (GB) of memory at the most. Don’t forget that there are 1,000 GB for every TB.

All of these processors allow ATERUI II to utilize parallel computing. In essence, this means that tasks and calculations can be split between the cores. Supercomputers break a problem into many different pieces and delegate those pieces to different cores, which function simultaneously to allow for greater computational speed. So instead of doing one thing at a time, ATERUI II is one of the world’s best multitaskers.

Astronomers ask plenty of questions that are so big, they need ATERUI II to help them find answers. An estimated 150 astronomers will use the Japanese supercomputer this year alone, and they don’t have to travel to ATERUI II’s homeland to do so.

This state-of-the-art machine will allow users to create simulations previously impossible for ATERUI II’s predecessors. For instance, earlier computers trying to model the Milky Way had to group stars together in order to calculate their gravitational interactions. After all, there are well over 100 billion stars in our galaxy alone. ATERUI II doesn’t need to lump anything together though – it can calculate the mutual gravitational interaction between all stars in the Milky Way individually, allowing for the most detailed simulations of our galaxy yet.

ATERUI II won’t stop there. Researchers have already been able to make models of the universe’s large-scale structure and even binary star system formation. Future projects may help us understand what happened before the epoch of recombination, when the universe became transparent to light, or glimpse into stellar interiors.

This realm of astrophysical simulations works in union with observational astronomy. Scientists often use models in an attempt to recreate what observations show. Consider this oversimplified example: say that researchers model how two binary stars are interacting. That model may produce a light curve (how the light from the system changes over time) or some other data that scientists can compare to observations. If observations of the light curve match that produced by the model, then researchers can say that they have a good idea of what is going on in that star system.

ATERUI II will take this concept of how models and observations work together and extend it to the largest scales. Even if a model does not produce what has been observed, all hope is not lost. Perhaps the model is incorrect or the observations require a different interpretation. Both scenarios provide an opportunity for new discoveries.

With all of ATERUI II’s computational power at their fingertips, astrophysicists will be able to answer some of the field’s long-standing questions. Researchers still won’t be able to hold a star in their hands, but it’s as close as they can hope to get.