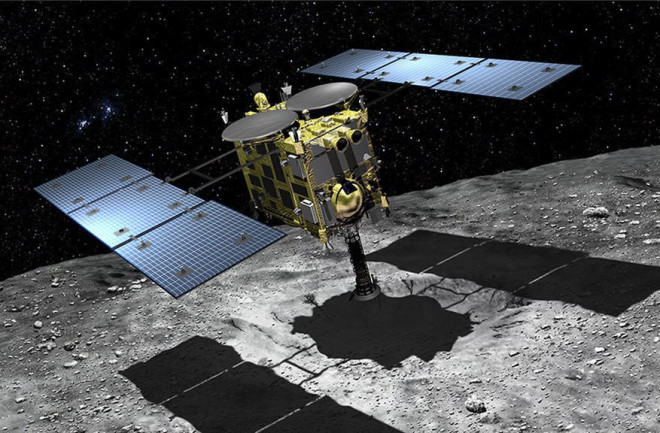 The Japanese space agency, JAXA, hopes to use its Hayabusa2 spacecraft to collect another sample from the crater they made on the asteroid Ryugu earlier this month. (Credit: Illustration by Akihiro Ikeshita (C), JAXA) Japan’s Hayabusa2 spacecraft dropped an explosive onto its asteroid home, Ryugu, back on April 5, blasting a new crater into its rocky surface so it could investigate what lies beneath. Since then, the spacecraft has been in hiding around the asteroid’s far side, waiting for the dust to settle. Yesterday, it ventured out to survey the damage. The pictures Hayabusa2 returned reveal a crater roughly 66 feet across, larger than even scientists’ most generous expectations. They had worried about a hole only a few inches across, which would be difficult to study, and hoped they might find one as large as 30 feet across. The larger-than-expected crater is making scientists question their findings so far about the makeup of material near the crater’s surface and just underground.

[embed]https://twitter.com/haya2e_jaxa/status/1121383204424962051[/embed] To image the blast zone, the spacecraft zoomed in to within about a mile of the asteroid’s surface yesterday. Then, it returned to its normal “home position” orbit more than 10 miles up, where it will wait while the mission team analyzes the most recent batch of photos. The Hayabusa2 team hopes that the spacecraft will have a chance to visit the new crater even closer, actually skimming the surface and collecting a sample of the newly overturned material. But first, engineers need to study the new images to see if they can find a safe spot for Hayabusa2 to touch down. If they can, it will fly close sometime this summer and fire a much smaller projectile into the crater to stir up material and then collect it. But if the new crater’s surface is too rough and spiky for a touchdown, researchers will have to make due with just pictures. Hayabusa2 already collected one sample from Ryugu’s undisturbed surface earlier this year. Once it finishes the last of its investigations, the spacecraft will depart Ryugu in December, and bring its treasures home to Earth for study next year.