Japanese Astronaut Grew In Space, But Not THAT Much 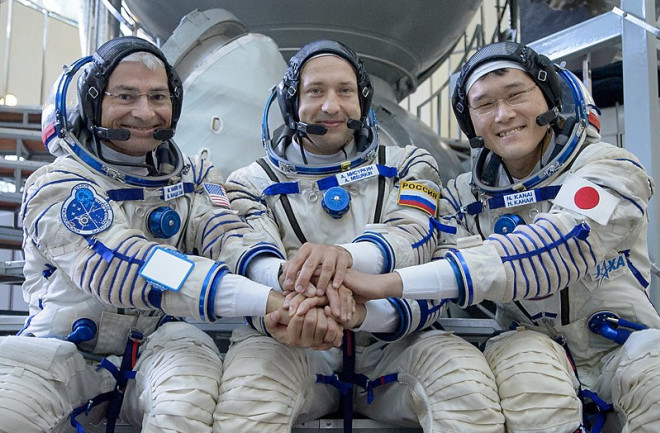 Norishige Kanai (right) pictured with fellow astronauts Mark Vande Hei of NASA (left) and Alexander Misurkin of Roscosmos (center). (Credit: Wikimedia Commons) A Japanese astronaut grew three and a half inches during the course of his trip to the International Space Station. If that sounds too incredible to be true, you're right. It's not. But some people evidently believed Japanese astronaut Norishige Kanai when he tweeted out a mistaken measurement from aboard the ISS Monday. He quickly re-measured himself after a Russian colleague questioned the measurement and found that the growth spurt was actually less than an inch — well within the range of what astronauts usually experience in space. Kanai tweeted out an apology, calling his initial measurement "fake news" and saying that he's happy he'll be able to fit in the Soyuz capsule that will take him home. His initial measurement was so extreme that he worried he'd be too big for the tight space, which contains seat liners custom-molded for each astronaut and cannot fit anyone above 6 feet, 3 inches tall. It's well known that astronauts grow a bit taller in the weightlessness of space, a result of the spine decompressing. The stretching is usually limited to no more than two inches though — Kanai's mistaken measurement put him at almost double that. It's not a permanent change though, as astronauts' spines compress again to their normal length when they return to the pull of Earth's gravity. Spinal stretching isn't just limited to spacefarers, either. Just laying in bed overnight, the spine will stretch out just a little bit, and then shrink again once we stand up. Adding an inch or two isn't the only bodily fluctuation astronauts experience. Most experience changes to their eyesight, probably caused by fluctuations in the fluid pressure behind their eyeballs. There are indications that astronauts are also at higher risk for heart disease after going to space, and they experience bone loss and diminished muscle density due to the effects of weightlessness as well.