It's Official — Voyager 1 Has Left the Solar System! 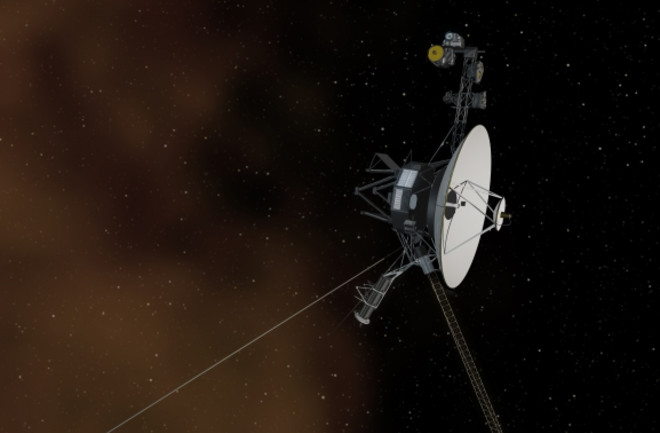 This artist's concept depicts NASA's Voyager 1 spacecraft entering interstellar space, or the space between stars. Credit: NASA/JPL-Caltech Humanity has now officially reached interstellar space, according to a historic NASA announcement today that the Voyager 1 spacecraft has left the solar system. Thus the much-debated is-it-or-isn't-it status of Voyager over the past few years has been firmly resolved — and the 36-year-old probe may have some of its most interesting science years still ahead of it. NASA reports:

New and unexpected data indicate Voyager 1 has been traveling for about one year through plasma, or ionized gas, present in the space between stars. Voyager is in a transitional region immediately outside the solar bubble, where some effects from our sun are still evident. A report on the analysis of this new data, an effort led by Don Gurnett and the plasma wave science team at the University of Iowa, Iowa City, is published in Thursday's edition of the journal Science.

The data came courtesy of a fortuitous coronal mass ejection from the sun in March 2012. The force of this ejection, when it hit Voyager in April 2013, vibrated the surrounding plasma, which the instruments on the spacecraft were able to measure. From that measurement scientists determined that the plasma was more than 40 times denser than what Voyager had encountered in the outer layer of the heliosphere — a density on par with that expected in interstellar space. The instrumentation that detected the vibrations, amazingly, included an eight-track tape recorder, reports the LA Times:

The antennas, which are connected to a radio transmitter, detect the oscillation, or vibration, of excited plasma particles. The device will convert the oscillations into an audible noise that is recorded on Voyager's vintage eight-track tape recorder. The frequency of the noise is associated with a specific density of plasma. The higher the frequency, the denser the plasma.

Listen here to that actual audio recording. Looking back through the data, the Voyager team believes the big day, when Voyager actually crossed the boundary into interstellar space, was probably August 25, 2012. That's an anniversary the craft will be able to celebrate for many years to come, scientists hope. The New York Times reports that study author Edward Stone "expects Voyager 1 to keep sending back data — with a 23-watt transmitter, about the equivalent of a refrigerator light bulb — until roughly 2025." This is one refrigerator light bulb we hope will stay on. Kudos Voyager — and godspeed!