It's Been a Busy Week of Explosive Eruptions in Mexico 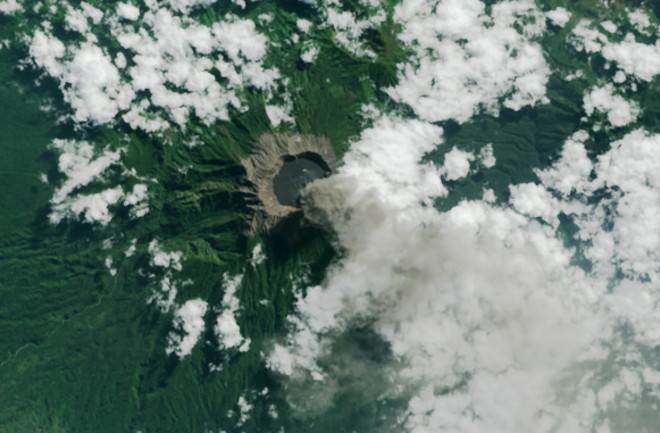 Raung in Indonesia, captured by Landsat 8 on July 11, 2015. Notice the dark lava filling in the summit caldera. NASA Earth Observatory Catching up with some volcano news: MexicoColima is no stranger to eruptions, but this past week has seen especially vigorous activity at the Mexican volcano. Last weekend, Colima had one of its largest explosive eruptions in years, sending pyroclastic flows down the slopes of the volcano after the summit lava dome collapsed. The ash plume that was created by this collapse reached 7.6 kilometers (~25,000 feet) and noticeable ash fell as far as 88 kilometers (54 miles) from Colima. Since then, smaller explosions have continued and views of the volcano at night show incandescent blocks of lava cascading down. However, with the destruction of the summit down, volcanologists in Mexico think that the explosive activity should begin to wane. Without the dome, less pressure builds in the volcanic conduit feeding lava to the surface. Over 670 people have been evacuated so far from the area around Colima, mainly in the 12 kilometer (7.5 mile) exclusion zone around the volcano. Not surprisingly, these explosions did significant damage to the local ecology and livestock. A large, Plinian-style eruption at Colima, which the volcano has experienced as recently as 1913, could have serious consequences for the over 400,000 people that live within 35 kilometers (21 miles). Although not working right now, you can check out Colima webcam to see what's going on. Phillipines Another volcano that seems to be more restless is Bulusan on the island of Luzon. A small explosive eruption today lasted 11 minutes and although the plume was only 200 meters, this (likely) steam-driven explosion has prompted PHIVOLCS to move Bulusan back to Level 1 alert status. Although no closures or cancellations have occurred due to the explosion, the

Civil Aviation Authority of the Philippines have warned pilots to be cautious in the vicinity of the volcano. Bulusan

has experienced bouts of steam-driven explosions without them leading to a larger, magma-driven eruption, but it is well-worth watching. Indonesia The continued eruptions at Raung and Gamalama have closed airports across Indonesia again, although one of the largest airports near Raung reopened today. This is an especially busy time for air travel in Indonesia as it is Eid, which marks the end of Ramadan. There are currently 24 volcanoes in Indonesia on elevated alert---a situation that is not uncommon in one of the most volcanically-active countries on Earth. The NASA Earth Observatory posted two great images of the current eruption at Raung. The first shows the ash plume that is causing all these air travel problems. The other is a fascinating shot from Landsat 8 that shows dark (solidified) lava filling the caldera (see above). It is a great image that really shows how even after cataclysmic eruptions that can destroy a volcano, new eruption can heal those wounds.