'It's a Haunting Thing': Space Artists on the First Black Hole Image 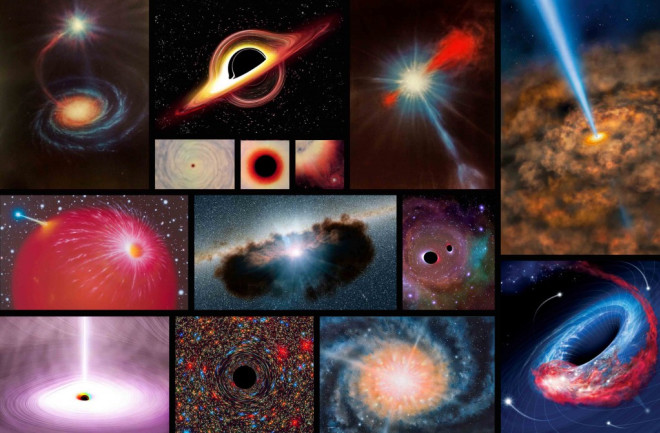 Thanks to a deep dive into our archives, and some help from space artists, we compiled a collection of the many ways artists have illustrated black holes across more than 40 years. (Credits (clockwise from top left): Adolf Schaller/Astronomy archives; Roen Kelly/Astronomy; Adolf Schaller/Astronomy archives; NASA/SOFIA/Lynette Cook/UPI; Roen Kelly/Astronomy; Rick Sternbach/Astronomy archives; Adolf Schaller (x3); Anne Norcia/Astronomy archives; Unknown artist, NASA/JPL-Caltech; Adolf Schaller) When researchers with the Event Horizon Telescope (EHT) unveiled the first true picture of a black hole on April 10, they finally succeeded in imaging the invisible. The bright ring of the accretion disk and the dark shadow of the event horizon stood out clearly, validating scientists’ theories as to what a singularity looked like. The event was a momentous one for the space artists who have spent decades drawing black holes in the absence of actual confirmation of what they look like. We spoke to a few of our contributors on what it was like to paint an unseeable object — and how they reacted to their first glimpse of a real life black hole.

Staring at the Shadow

Adolf Schaller, an artist who has spent more than 35 years painting the cosmos, eagerly watched the press conference that unveiled the first images. “It’s just fantastic to be able to see that shadow,” he says. “It’s a haunting thing. It’s staring right back at us, isn’t it?”

An intermediate-mass black hole grows by gobbling up a 30 solar-mass blue giant star. (Credit: Courtesy Adolph Schaller) Schaller, in addition to his decades of freelance work for Astronomy, the sister magazine of Discover, and other publications, also worked on Carl Sagan’s famous Cosmos television series, winning a Primetime Emmy for his visualizations. His interests in art and science have gone hand-in-hand for more than 40 years, stretching back to the mid-1970s. “I’ve been studying black holes carefully for most of my artistic career, and my interest in physics just glommed right onto that,” he says. “At that time, beginning in the early and mid '70s [...] I had already been thinking about black holes — just from my reading on the subject.” For decades, scientists have used models and their knowledge of the laws of physics to produce simulations of what a black hole might look like, in the absence of an actual picture. For example, computer simulations were invaluable to Schaller when it came to representing how gravity would warp and distort light around the event horizon of a black hole.

Painting far-away cosmic objects can also entail putting some unusual queries to data-minded scientists. Michael Carroll, another frequent Astronomy art contributor, has been painting space scenes like planetary vistas and raging stars, since the early 1980s. He says that, for him, being an artist has meant asking scientists unorthodox questions. “Often, the astronomical artists asks questions of the scientists that don’t often cross their minds because they don’t think visually; they’re thinking in terms of numerical data,” he says.

Read more: Everything Worth Knowing About Black Holes

The resulting answers, like what colors might flow out of a black hole or how, exactly, it distorts the light that comes near the event horizon helped fill in his mind’s eye. As his understanding of black holes grew, it deepened some of the ways Carroll opted to portray them. “You begin to see that it doesn’t really suck light in, it bends the space-time continuum around itself so it bends light in,” Carroll says. This creates some interesting visual effects like faint wisps of jet material emanating in an unusual swirl pattern from the event horizon.

Humanity's first ever real image of a black hole shows the supermassive one at the heart of galaxy M87. (Credit: Event Horizon Telescope) Both Schaller and Carroll weren’t much surprised by the EHT’s first image, in part because black hole behavior is relatively well-understood

. Even in the absence of a physical image, scientists’ simulations of a singularity did a fairly good job of reproducing one. For them, that’s good news — it means their work has been largely accurate for decades. But for Carroll, there are still unanswered questions. For instance, what happens to the infalling matter near a black hole? What are the structures of the jets like? Are there dozens of explosions from matter colliding near a black hole? And then there are the really close up things. “I would love to see details of the accretion disc,” he says. “What does the texture look like around that black hole? What colors come out in the visible spectrum?” Those are questions that will be answered quite a few Event Horizon Telescope upgrades down the line.