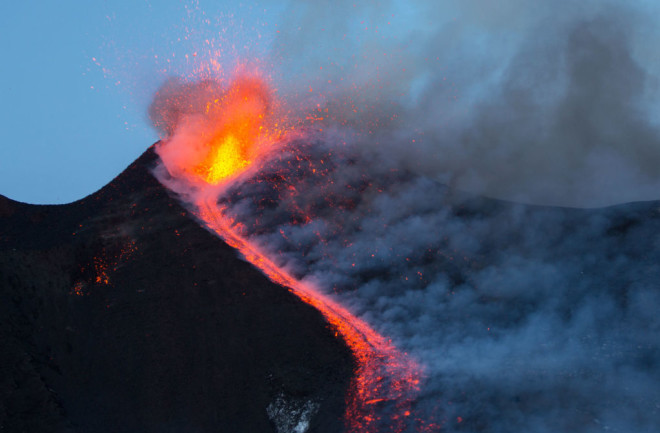 Europe's biggest and most powerful volcano, Mount Etna, erupts sending an ash cloud across the holiday isle of Sicily.Getty Images After one of the most quiet years in decades, Etna has decided to make 2017 a little more exciting. Early this week, the volcano had a moderate strombolian eruption, what the folks who monitor Etna call a "paroxysm," that produced a lava fountain over the summit of the volcano. Strombolian eruptions (named after nearby Stromboli) are caused by gas-rich magma reaching the surface and erupting explosively. They also tend to produce lava flows at the same time, but they are less intense explosions than a plinian eruption (like what happened at Pinatubo or St. Helens). Some of the images of the eruption show a stream of lava coming from the New Southeast Crater while strombolian explosions threw lava bombs hundreds of meters from the vent. The ash from this eruption did not disrupt the air traffic in or out of the airport at nearby Catania---however, past stronger eruptions have caused it to shut down. Of course, there was a torrent of hyperbole published about this eruption. But even as dramatic as this eruption looked, it is relatively benign, mainly impacting the summit area of Etna. Always be skeptical of news articles that sell any volcanic eruption as a portend of doom or massive destruction. Very few actually are as hazardous as breathless media outlets would suggest. Eruptions at Etna may pose a hazard to air traffic through ash emissions, and slow-moving lava flows could endanger some of the villages and homes on the lower slopes of the volcano. This has happened before, and attempts were made to divert the lava flows (with moderate success). But the lava flow jeopardizes property much more than life; the flows move so slowly that you can likely out-walk them. Etna does have some history of explosive eruptions, but in its most recent activity over the last decade, these events have been very rare. Remember, there are a lot of webcams pointed at Etna. You can see a lot of different views (including IR thermal camera) on the INGV webcams, while Radio7 has a variety from different views and EtnaGuide has some near the summit. The next time Etna rumbles, be sure to check it out live.