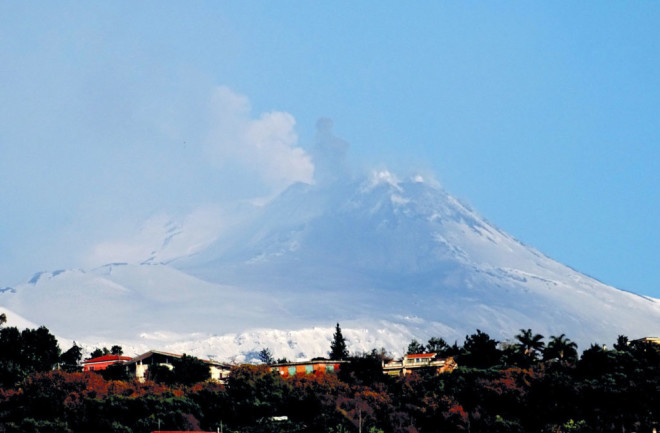 The vapor-and-ash plumes from Etna on January 26, 2017.Boris Behncke/INGVEtna in Italy had a real quiet 2016. However, it appears that 2017 won't follow the same path. Since January 23, the summit craters on Etna have been restless and now strombolian explosions have been rocking the South East Crater. In fact, two distinct vapor-and-ash plumes are active on the Sicilian volcano. This is the first sign of magma at the surface at Etna in over eight months (which is a long time for the nearly-constantly restless volcano). The current eruption (termed "mild" by the folks at the INGV's Etna Observatory) first started with loud explosions and incandescent blocks on January 20. By January 23, full-fledged strombolian explosions were occurring from a vent between some of the older South East Crater vents. On top of that, glowing and a small plume was noted from the

Voragine crater as well. Etna is well-known for having eruptions where multiple summit vents are active, so this isn't too out of the ordinary. Whether this activity is a harbinger of an active new year at Etna is still unknown, but clearly the conditions are changing at the Italian volcano. When the weather is favorable, you can watch the eruptions at Etna on the webcams.

Some other volcano notes: In Alaska, Bogoslof continues to produce occasional big blasts that reach over 10 kilometers (33,000 feet) over the volcano. The Alaska Volcano Observatory posted some more maps showing how the island has changed since the eruptions started in mid-December 2016. Meanwhile, an energetic earthquake swarm was noticed at Takawangha. Now, if that name seems especially unfamiliar (for an Alaskan volcano), it might be because there are no known historic eruptions from the volcano in the

Andreanof Islands. Its neighbor, Tanaga, erupted in 1914. The earthquake swarm that started on January 24 could suggest that magma is moving beneath the volcano, but has waned over the past three days. Currently, AVO has Takawangha on a Yellow alert status in case this swarm is a precursor to a new eruption.

In Ethiopia, Erta'Ale appears to be producing the first lava flows on its slopes in a decade. The NASA Earth Observatory posted a great Landsat 8 image of the eruption showing both the summit lava lake and the flank lava flows. The volcano is famous for having an active lava lake at the summit, but eruptive activity has been confined to this area over the last 10 years. However, reports now indicate lava flows moving south from the volcano towards some areas of population. The eruption appears to be from an new fissure vent on the southeastern slopes of Erta'Ale. The lava flows are likely to move slowly enough as to not be a hazard for people's lives, but they can easily destroy homes and infrastructure. UPDATE 2 PM EST 1/27/17: Simon Can (MTU) has added this fun fact: the Erta'Ale eruption is the largest sulfur dioxide emission ever measured (by satellite) from the volcano:

Erta 'Ale's #eruption also produced the largest SO2 emissions ever measured from space at the #volcano@NASANPPhttp://t.co/y7lKaKCy93pic.twitter.com/TqocSuqFHY