It Was A Great Weekend For Lava 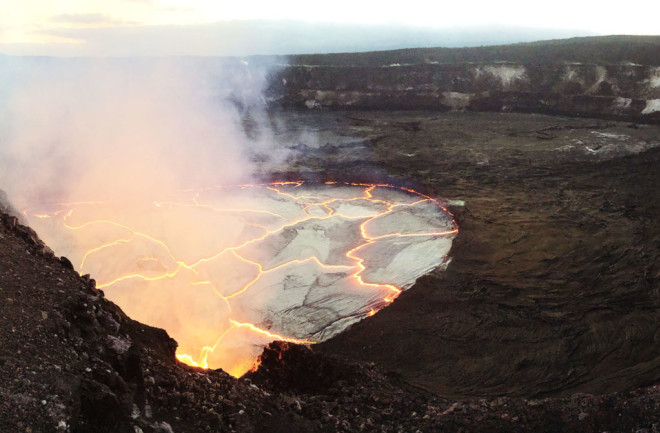 The summit lava lake at Kilauea, seen on September 7 when it was only 8 meters below the rim.HVO-USGS It was a big weekend for lava flows at volcanoes around the globe. Let's check out some highlights: Hawai'i We almost saw new lava flows inside the Halema'uma'u Crater at Kilauea, as the lava lake was close to reaching its rim (see above). This was highest the lava lake has been since April-May 2015, when a small outbreak occurred as the lake overflowed. However, the night of September 11 saw a small deflation of Kilauea's summit, leading to the lava lake dropping 10-15 meters (33-49 feet). The Hawaii Volcano Observatory thinks that we might expect to see inflation return at the summit soon and the lake level to rise again. A few small earthquake swarms hit the summit and East Rift as well, likely related to pressurization at Halema'uma'u and lava moving within the volcano. HVO released some cool video of spattering within the summit lava lake. While you're watching that video, be sure to watch the surface of the lava lake as it moves and shifts like black leather. Near the spattering area, you can see some of the lake crust crumpling and then disappearing back into the lava lake. Be sure to watch the webcams that watch the lava lake, including both a panorama cam of the lava and an infrared thermal cam. Reunion IslandPiton de la Fournaise had another fissure eruption over the weekend, with their typical lava fountains and flows (see below) that followed. Video of the eruption (below) shows the long tendrils of lava snake down the volcano from the actively fountaining vent. The vigor of the eruption has dropped four-fold since it began on September 11 according to the latest report from the Observatories Volcanologique du Piton de la Fournaise (OVPF). A brief earthquake swarm on September 10 preceded the eruption, but the initiation of the eruption was more rapid than most at the Indian Ocean volcano. In May, a similar eruption occurred from theChâteau Fort cone. You can watch the eruption on one of the OVPF webcams.

posted a great image of the long lava flow

on the slopes of Fuego

in Guatemala. The flow, imaged in infrared from Landsat 8, reached ~2.5 kilometers (1.5 miles) from the summit vent. This lava has been interspersed with small explosive eruption throwing blocks 250 meters

(~820 feet) as well during this very busy year at Fuego. Vanuatu Volcanologist Shane Cronin posted some impressive video on Twitter of explosions at Yasur

in Vanuatu. The blasts threw ballistic blocks straight upwards, showing the force of these explosions.

You can also see some video of the eruption Dr. Cronin took at night

as well. These explosions are relatively common

this year at Yasur, with those blocks getting throw hundreds of meters from the vent as bubbles of magma burst. Philippines In monitoring news, PHIVOLCS has raised the alert status

in the Philippines after increased seismic unrest. Most importantly, the base of the volcano appears to have inflated since July

according to the latest PHIVIOLCS report, suggesting new magma is rising into the volcanic edifice and some wells around the volcano have seen decreased water or dried. No glow has been spotted at the summit at this point. PHIVOLCS does not think a large eruption is coming soon and raised the alert status to remind local authorities to be ready if Mayon starts to awaken. The last significant eruption of Mayon was in 2013, when a small phreatic (steam-driven) blast killed five hikers

. That explosion happened without warning, which is why there is a permanent 6 kilometer exclusion zone around the volcano. New Zealand Finally, White Island

had a small explosive eruption on September 13

. This new activity has prompted GNS Science to move the alert status to 3 and aviation alert to Orange. Check out the GeoNET webcam on the crater floor

at White Island to see if the eruptions continue.