It Took 83 Engines to Get to the Moon 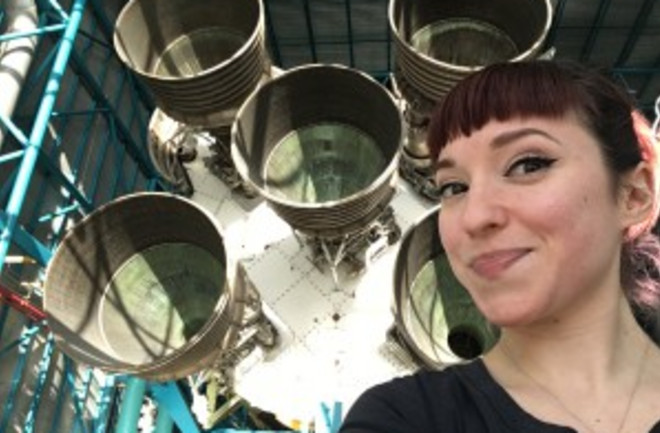 The five F-1 engines of the Saturn V in Florida. My own selfie. The first time the Saturn V launched in November of 1967, ceiling tiles in the nearby studio where Walter Cronkite was reporting from live fell to the floor. The power of the five F-1 engines was astonishing, and their combined 7.5 million pounds of thrust hasn't yet been matched. But there were more engines than just those five biggest ones. All told, it took 83 engines to get an Apollo mission to the Moon and safely back to Earth. [embed]https://www.youtube.com/watch?v=F2c9LPNRonQ[/embed] Engines and Motors First, we have to make one very important distinction between rocket engines and motors, because I can hear groaning sounds over the claim of “83 engines.” Properly speaking, the Saturn V had a total of 83 engines and motors. The difference is in the kind of fuel each burns. A rocket engine burns liquid fuel. Take the F-1 as an example; it burned a mix of rocket grade kerosene called RP-1 and liquid oxygen abbreviated LOX. The upper stages of the Saturn V also burn liquid fuels, liquid hydrogen or LH2 and LOX. Liquid fuels are tricky. In the case of the LOX, oxygen needs to be super cold to be in a liquid state, so even with insulation around the tank it inevitably warmed enough to boil off if left too long. To keep the most LOX in the tank it needed to be loaded in very close to launch. But the challenges of dealing with cryogenic liquids was offset by the benefits. Liquid engines can be throttled and restarted, two characteristics you really want when doing precision burns to adjust your trajectory on the way to the Moon. Rocket motors, on the other hand, burn solid fuel. The best example of these we have is the SRB, the solid rocket boosters that helped launched Space Shuttle missions. The good thing about solid rocket motors is they take away some guesswork; they ignite and burn, simple as that. The downside is they can’t be throttled or relit.

The S-IVB firing to send the crew to the Moon, aka the translunar injection burn. NASA. The Flight of the Saturn V So lets get back to the rocket at hand, the Saturn V, and the 83 rocket engines and motors — basically sources of propulsion — needed for a successful mission to the Moon. It started with the first stage, the iconic F-1 engines that hold a special place in any space nerd’s heart. These five engines were the first to ignite in a 1-2-2 pattern. The centre engine lit first followed by opposing external pairs with a 300 millisecond delay. Arms held the massive rocket in place as the engines lit and developed full thrust. Then the arms released and the rocket rose off the launch pad. The burn time for each stage varied slightly with each mission, but on average the first stage burned for about two and a half minutes before its fuel was spent and its usefulness finished. At that point, at an altitude of about 205,000 feet, the first stage would separate from the rest of the rocket. This separation triggered eight retrorockets on the stage, small solid fuel motors that fired with 88,600 pounds of thrust for 0.666 seconds. Though the stage did continue to rise with the velocity from launch, the retrorockets help put some distance between the first and second stages. Hundreds of milliseconds later, eight ullage motors on the interstage, still attached to the S-II second stage, fired. These served to put more distance between the two rocket stages, but more importantly gave the second stage a small kick forward. Firing with 22,500 pounds of thrust for four seconds, it was enough to ensure the fuel in the tanks was flush against the feed lines so the five J-2 engines that powered the S-II could ignite cleanly.

Launch Escape System jettison. NASA. While the S-II was burning, it was time to get rid of the Launch Escape System. The lattice-like structure at the very top of the Saturn V was armed with four rocket motors that could rip the Command Module away from the rest of the rocket during an emergency abort. But a little more than three minutes into the flight it wasn’t needed anymore. The Tower Jettison motor fired to pull the LES away, taking the boost protective cover on the Command Module with it. The S-II’s five J-2 engines burned for about six minutes before running out of fuel at an altitude of about 114.5 miles. Again, the separation between the spent second stage and the third stage was aided by retrorockets. This time it was four that burned with 35,000 pounds of thrust for just 1.5 seconds to give the third stage, the S-IVB, room to burn. The S-IVB’s active flight began with two ullage motors that kicked the stage forward before the single J-2 engine came to life. Also on the S-IVB were two Auxiliary Propulsion System engines that helped with ullage as well as attitude control. The stage burned for about two minutes and 45 seconds before shutting down. By this point the spacecraft was safely in Earth orbit. To the Moon and Back Again Getting to the Moon meant burning the S-IVB again, this time for a little over five minutes to give the spacecraft the velocity it needed to escape Earth orbit and head off for the Moon. Now on the translunar coast, the crew started using the engines on the spacecraft, specifically on the Service Module, which was the powerhouse for the bulk of the mission. It had one main engine, the SPS or Service Propulsion System, as well as four blocks of four reaction control thrusters. These were the rockets that facilitated collecting the Lunar Module from its stored location in the S-IVB and adjusted the spacecraft trajectory during the flight.

SPS course correction burn with the two spacecraft docked. NASA. The SPS engine was also the one that slowed the spacecraft into Lunar orbit where the crew separated the Command-Service and Lunar Modules. At that point the lunar landing crew relied on the LM’s own propulsion systems. Like the Service Module, it had four blocks of four reaction control thrusters, but they weren’t enough. To land on the Moon the crew needed the big Descent engine as well as the thrusters for fine control. Leaving the Moon demanded the Ascent engine, another one that worked in conjunction with the thrusters to get the crew off the Moon and into orbit where they docked with the waiting Command-Service Module. The SPS engine fired to send the crew from Lunar orbit back towards the Earth, adjusting the course with smaller burns as needed along the way. Finally facing reentry through the Earth’s atmosphere and splashdown, it was time to ditch the Service Module; the gumdrop shaped Command Module entered the atmosphere alone. But no one was going to leave it to chance and hope that it maintained the right attitude during this critical final mission phase. And so there were twelve reaction control thrusters embedded in the Command Module as well. They made sure the heat shield bore the brunt of the reentry heat, sparing the parachutes and complications so they could deploy safely at the end of a mission for a nice, soft splashdown. The Missing Five If you're keeping track, that’s more than 83 engines and motors; you might have counted 87. There were actually 88 on the Saturn V, but five did nothing during an optimal mission. The four motors that powered the Launch Escape System were aided by a pitch motor that would direct the escaping Command Module safely away from the exploding rocket. Those never fired so I left them off my count. Thanks to the Kansas Cosmosphere for sparking this one! A placard next to an APS rocket mentioned 83 engines total on the Saturn V and got me hunting down the breakdown. And thanks, too, to my buddy Lyle for helping me find number 83; I learned a lot about the LES writing this blog post. Sources: Saturn V New Reference First Stage Fact Sheet; Saturn V New Reference Second Stage Fact Sheet; Saturn V New Reference Third Stage Fact Sheet; Technical Information Summary AS-501; Launch Escape Subsystem from Apollo news reference material.