ISON Update: The Comet Streaks Toward the Sun, Which Promptly Lets Loose With a Coronal Explosion 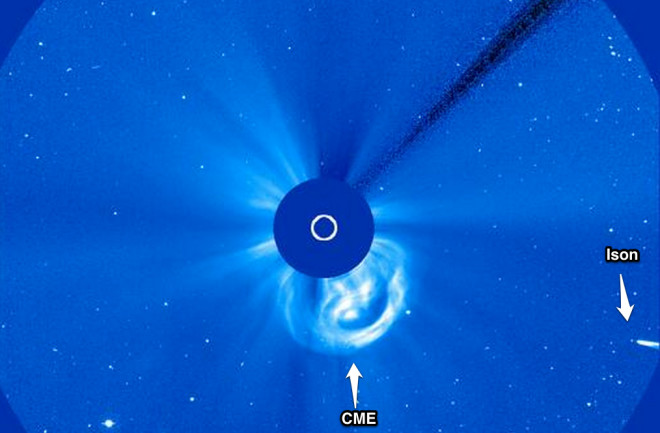 As Comet ISON has moved into the field of view of NASA's SOHO spacecraft, the sun has let loose a coronal mass ejection, or CME. Click on the image for a short animation. (Source: NASA) |Update 1:15 p.m. MST, 11/27: Karl Battams of the Comet Ison Observing Campaign is reporting that the comet is brightening in line with other sungrazing comets. Writing in his latest update, Battams says, "We cannot comment on whether the nucleus is intact or not, but our analyses indicate that its rate of brightening is directly in line with that we have experienced with other sungrazing comets. This has no implication on its chances of survival." So, will Comet Ison survive it's passage through the sun's million degree corona tomorrow? Stay tuned... | Here comes Comet ISON, streaking toward the sun at more than a hundred thousand miles per hour — and now visible for the first time to NASA's Solar and Heliospheric Observatory spacecraft. No sooner had the comet entered SOHO's field of view than the sun let loose with a massive eruption of particles called a coronal mass ejection, or CME. You can see it all in the image above, from SOHO. In the image, the sun — indicated by the circle in the middle — is blacked out so dimmer features like the CME can be seen clearly. Is ISON still intact? Yesterday, the evidence was suggesting that maybe it was not. But a definitive answer still isn't at hand. As soon as there's news, I'll post it here. Stay tuned.