"Is Your Brain Really Necessary?", Revisited

According to British biochemist Donald R. Forsdyke in a new paper in Biological Theory, the existence of people who seem to be missing most of their brain tissue calls into question some of the “cherished assumptions” of neuroscience.

Forsdyke discusses the disease called hydrocephalus (‘water on the brain’). Some people who suffer from this condition as children are cured thanks to prompt treatment. Remarkably, in some cases, these post-hydrocephalics turn out to have grossly abnormal brain structure: huge swathes of their brain tissue are missing, replaced by fluid. Even more remarkably, in some cases, these people have normal intelligence and display no obvious symptoms, despite their brains being mostly water.

Here’s Forsdyke’s illustration: a normal adult brain on the left, alongside two striking adult post-hydrocephalic ones. The black spaces are nothing but fluid: 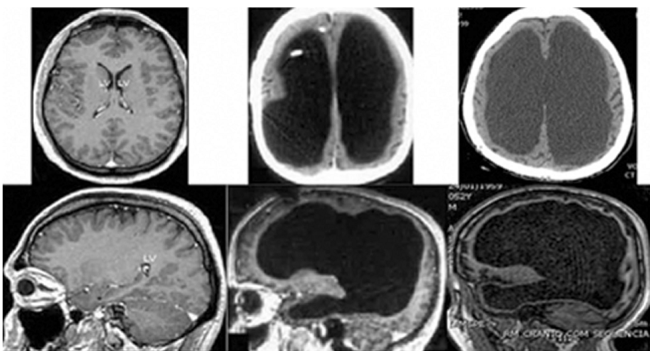 This phenomenon was first noted by a British pediatrician called John Lorber. Lorber never published his observations in a scientific journal, although a documentary was made about them. However, his work was famously discussed in Science in 1980 by Lewin in an article called “Is Your Brain Really Necessary?“. There have been a number of other more recent published cases.

Forsdyke argues that such cases pose a problem for mainstream neuroscience. If a post-hydrocephalic brain can store the same amount of information as a normal brain, he says, then “brain size does not scale with information quantity”, therefore, “it would seem timely to look anew at possible ways our brains might store their information.”

Whereas the orthodox view is that “information relating to long-term memory is held within the brain in some chemical or physical form”, Forsdyke says that we need to consider the possibility that memory is stored “in some extremely minute, subatomic, form, as yet unknown to biochemists and physiologists” or, maybe, that it is stored “outside the body—extracorporeal!”

Forsdyke refers to this latter possibility as ‘cloud storage’, suggesting that perhaps “The brain [is] as a receptor/transmitter of some form of electromagnetic wave/particle… of course, when speaking of extracorporeal memory we enter the domain of “mind” or “spirit” with corresponding metaphysical implications.”

Hmm. There’s no question that some of these brains are very striking. But I don’t think we need to throw out the textbooks yet.

While the enormous “holes” in these brains seem dramatic, the bulk of the grey matter of the cerebral cortex, around the outside of the brain, appears to be intact and in the correct place – this is visible as the dark grey ‘shell’ beneath the skull. What appears to be missing is the white matter, the nerve tracts that connect the various parts of the cerebral cortex with each other, and with the other areas of the brain.

However, some white matter is still visible as the pale grey layer that borders the holes. The big question is whether this layer of white matter is sufficient to connect up the grey matter and allow it to function normally. There doesn’t seem to be much of it, but on the other hand, we really don’t know how much white matter is strictly necessary.

I wonder also if the white matter might be denser than normal i.e. if the fibers were packed together due to being gradually compressed by the expanding fluid spaces?

No-one seems to have looked at this possibility directly; while there have been brain scanning studies of these adult post-hydrocephalics, no detailed post-mortem studies of their brain tissue have been published, as far as I know. (Forsdyke does not discuss any and I couldn’t find any in my searches.) For more on the neuroanatomy of this issue, see John Hawks (discussed by Forsdyke.)

Therefore in my view, these cases probably won’t require us to rethink neuroscience, although they do raise the issue of how much white matter is necessary. It may be that much of our white matter is redundant, which would be interesting, but not on a metaphysical level. I’m surprised that more research hasn’t been done into this issue, anyway.

Thanks to Rolf Degen for letting me know about this paper.