Is Volcanic Activity Increasing Across the Globe? No, But Your Brain Thinks So 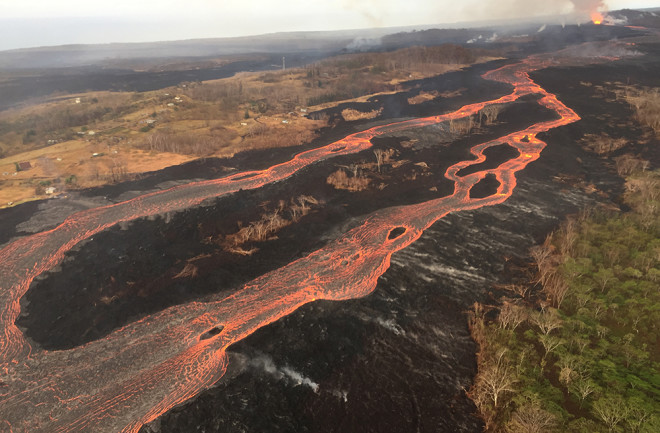 Lava flows from Fissure 8 on Kilauea, seen on July 2, 2018. USGS/HVO. Since high profile eruptions like the ones at Kīlauea or Fuego, those of us in the volcanosphere get a lot of emails/tweet/questions that ask a very similar question: Is volcanic activity increasing? In fact, many times the question isn't even if it is increasing but why it is increasing, accepting without question the notion that we are experiencing more volcanic eruptions today than in the Earth's past. However, ask a volcanologist (like me) that question, and you'll get the same answer from pretty much everyone: No, it is not increasing. So, why do so many people think it is? Well, that comes from stuff going on in your head rather than anything in our planet. So, why do people perceive volcanic activity as increasing when it isn't? To answer that, let's start with Mookie Betts. Many of you know who he is already. He's not a famous volcanologist or an insightful statistician or a world-renowned anthropologist. No, he's an outfielder for the Boston Red Sox.

Red Sox outfielder Mookie Betts. Flickr - Kevin Allison. OK, so you're asking "where is he going with this?" Well, Mookie is very good at baseball. Very, very good. So good that for the start of the 2018 season, many fans and writers were suggesting that he was the best all-around player in baseball. There is nothing particularly wrong with saying his performance to start the season was remarkable, possibly the best start of any hitter in the game. What people's reactions to Mookie after his fast start show is a concept called "recency bias". This is a trick in your brain where you value what has happened or what you have learned most recently in your decision making. Mookie Betts may have had a great start to 2018, but when you look at the full record of Mookie Betts' career (see below) versus what is the consensus "best player" in the game -- Mike Trout -- you can clearly see that there is no argument: It's Trout, save for the blip of 2018 (so far).

Recency bias in action: a plot of the career wOBA of Mookie Betts and Mike Trout, showing how Trout is clearly the best player, except for start of 2018. Fangraphs. Recency bias is powerful when it comes to shaping people's perceptions of patterns and what the future might hold. Being a fantasy baseball player, I tend to rely too much on looking for the "hot batter" or "hot pitcher", believing strongly in the idea that someone who has recently performed well will continue to do so even if their longer record does not support their current success. Sometimes, this "hot hand" is true, but most of the time, my chosen player goes back to their typical pattern quickly (regressing to the mean, so to speak). A related concept is "primacy bias"; where your brain favors the information you first learned, even when better, newer information is presented. To put it in the context I've been using, there are many examples of baseball players who broke into the major league scene with big numbers but then were never able to reproduce that success. Yet, they keep getting signed because of that bias -- people remember their success (I'm looking at you, Angel Berroa). I've written about how the human brain is really good at finding patterns in random noise before and both of these biases are processes that our brains have developed to handle information. The same ideas can be applied to other areas of life. Investors are warned against using recent performance to judge where to put their money. Bosses are trained not to use the recent performance of their workers evaluate their workers. And this is happening to all of us who see the news and think because there has been a flurry of something, it means that something fundamental has changed that goes against the long-term pattern. The current spate of high-profile eruptions around the world has made many people worry that volcanism is increasing around the world. However, once you start looking at the data and the long-terms pattern of eruptions over the last few millennia -- such as the amount of sulfur dioxide in the atmosphere -- it is clear that there is no increase. Clusters of earthquakes cause similar fears to arise, but again, your brain is biased by what has been happening most recently. But wait, there's more! This perception of an "increase" in volcanism is also the product of something else: access to information. When you look at the patterns of known eruptions in the past 200 years, the first thing that jumps out is what seems like a big increase. However, that is a big jump to a conclusion without looking at the reasons for the pattern. What else has happened over the past 200 years? First off, we can watch volcanoes more closely -- and watch more volcanoes -- using technology like satellites, webcams, seismometers, infrasound, aircraft and more. This means eruptions that are in remote locations are now known and small eruptions are captured by our observations. A small explosion that leaves little permanent record on a remote island in the Aleutians that 200 years ago would be missed completely is now able to be recorded. That means a lot "more" eruptions!

Volcanism and population growth over the past 600 years. Global Volcanism Program/Smithsonian Institution. On top of that, more people live near volcanoes thanks to the boom in global population (see above). Air travel covers much of the planet every day, and those flights can be impacted by remote eruptions as well. Combine that with the ability to communicate more rapidly than ever, we can find out that a new eruption has started within seconds almost anywhere on the planet.

Global volcanic activity in 2018 so far:

Take all these pieces -- your brain's biases, the increase in monitoring, the speed of communication -- and at times it can really feel like the planet is changing rapidly. However, there are no signs that this is true: Eruptions are at the same level as we always have. Just check out the Global Volcanism Program's Weekly Reports

to see how much volcanism occurs each week, and you'll see how true this is. Rates of volcanism can change, but on much longer timescales than a human lifespan, so don't fall prey to those who want to make the world seem more chaotic and dangerous than it is.

{Special thanks to Fangraph's Jeff Sullivan for the example of Betts versus Trout.}