Is Time Running Out For NASA's Mars Opportunity Rover? 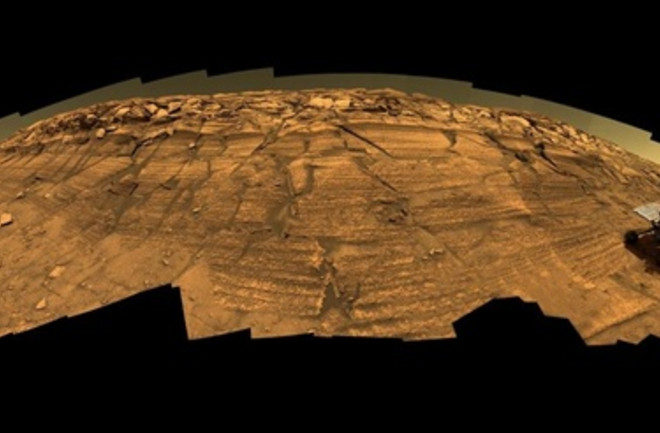 A computer-generated Opportunity explores Burns Cliff on Mars.(Credit: NASA/JPL-Caltech/Cornell) Since June 10, the 14-year-old Opportunity rover has been silent, presumably sleeping as thick dust clouds blocked the Sun from its solar cells. But now, that sky is clearing, and NASA is implementing a listening plan for the rover through January 2019. Without power, the rover has likely experienced several faults. Among them, its mission clock may have stopped recording time accurately. To counteract this possibility, the rover’s mission team is both passively waiting for the rover to communicate at predetermined times and actively pinging it with commands to respond, just in case the rover isn’t sure when it should be sending signals back to Earth.

As of September 11, the tau value — which measures the opacity, or clarity — of the atmosphere above the rover’s site had fallen below 1.5 (lower tau means clearer skies) for two consecutive weeks. This means sufficient sunlight can once again reach the rover’s panels to recharge its batteries. It also starts the clock on a 45-day period that NASA believes represents the best window for getting a response from the rover. “If we do not hear back after 45 days, the team will be forced to conclude that the Sun-blocking dust and the martian cold have conspired to cause some type of fault from which the rover will more than likely not recover,” said John Callas, Opportunity project manager at NASA’s Jet Propulsion Laboratory, in a press release. Throughout the massive, planet-encircling dust storm that Opportunity had been riding out, the mission team’s primary concern was the inability of the rover to recharge its batteries. Battery-damaging cold, while a concern, is less likely to have affected the rover, as thick dust can actually keep the ground warmer than average and provide some protection. With sunlight now reaching the surface, the rover should have no problem slowly warming and waking up. It is less likely, says the mission team, that dust piled up on the rover’s solar panels is hindering its recovery efforts. Even if this has happened, they say one of Mars’ many dust devils may come along and sweep the dust away, giving the rover a windy power wash and allowing it to wake up.

Can Yo Hear Me?

Once the batteries can provide sufficient power, the hope is that the rover will restart and begin to assess its condition, which includes trying to communicate with Earth at predetermined intervals. In case the rover hasn’t been keeping accurate time, the mission team is now actively transmitting a command telling the rover to send back a beep. This signal is being sent multiple times per day, three days a week. Even after active communications attempts have ended, the team will continue passively listening for the rover, just in case it needs additional time to wake up or one of the “cleaning dust devils” happens by. “In the unlikely chance that there is a large amount of dust sitting on the solar arrays that is blocking the Sun's energy, we will continue passive listening efforts for several months,” said Callas. Opportunity is one of a pair of rovers initially tasked with a 90-day exploration of the Red Planet. Recovery efforts for its twin Spirit rover were finally called off in 2011, when a series of incidents had reduced the rover’s ability to generate power and it likely went to sleep, just as Opportunity has, but was never able to generate the power needed to awaken. In Spirit’s case, a problem affected the rover’s ability to communicate on its own unprompted and active efforts were the only way to potentially reach the stranded explorer. The same issue does not affect Opportunity, so the team remains hopeful that by passively listening for the rover for several months, its small, distant voice will soon be heard. Once the 45-day window has passed, Opportunity’s team will report to NASA and further active recovery efforts may be planned. Time hasn’t yet run out for the aging rover, but with only a few months before the active search may be called off, the stakes just got a little higher. But the mission team is optimistic. “We are pulling for our tenacious rover to pull her feet from the fire one more time. And if she does, we will be there to hear her,” said Callas. This article originally appeared on Astronomy.com. Read the original.