Is This the Death of Comet ISON?

UPDATED 11/29 All along, astronomers knew that there was a real possibility that Comet ISON would not survive its passage by the sun. Now it seems like the comet may in fact be in the middle of a catastrophic disintegration, based on the latest images from NASA's SOHO observatory. In this view, the comet's tail splits in two, and the trail of the comet seems to shrink and peter out closer to the sun. It's not clear yet what is happening, but this sure looks like the comet's last act. 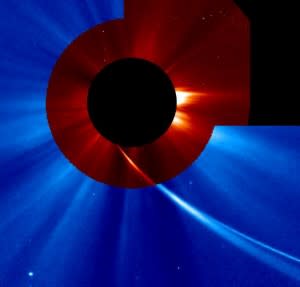 Comet ISON's last stand? NASA's SOHO spacecraft watches the trail of the comet toward the sun (blotted out in the middle). Credit: NASA/SOHO I previewed this possibility in my feature article in Discover magazine several weeks ago: Maybe some diminished portion of the comet will remain intact; maybe it will break apart and disperse entirely. Either way, the public unraveling of Comet ISON will be cause for celebration, not mourning. “Comet ISON is an extraordinarily rare object,” says Carey Lisse of Johns Hopkins University, who is coordinating an international observing campaign. “It isn’t just hyperbole. We are going to go to town on it. And we are going to learn a lot.” All of that still holds true, and Comet ISON is adding new mysteries. The SOHO images appear to show the comet vanishing entirely, which is very odd since even a vaporizing comet should leave a visible trail of silicon, iron, and other high-temperature bits within the nucleus. What does it all mean? Astronomers are still trying to make sense of it all. The folks at the Planetary Society are helping to stay on top of it as well. The likely breakup of Comet ISON is bad news for observers, but in many ways good news for science. Now we really get to see what is inside an extremely unusual primordial comet, making its first passage by the sun since the formation of the solar system 4.5 billion years ago. Nature has just done the hard work, cracking open Comet ISON to expose secrets that would otherwise remain hidden forever. Now it's up to us to watch and learn. UPDATE: Something did emerge from the other side of the sun. Is it an intact nucleus, a series of fragments, a cloud of debris? Astronomer are watching, speculating, and puzzling over this endlessly surprising comet. Researchers at the Max Planck Institute in Germany say Comet ISON still had an active nucleus as it rounded the sun. The unstoppable team at the Comet ISON Observing Campaign make the case for fragmentation or disintegration (and explain the difference between the two). Still totally unknown: whether there will be much of anything for observers to see over the next week as Comet ISON--or whatever is left of it--climbs out of the sun's glare and into the morning sky. The latest, best guess is that it will be visible in binoculars but not to the naked eye. But as the comet has made a mockery of every previous prediction, take this one with a large block of salt. Follow me on Twitter: @coreyspowell