Is the Devil a Great Cop? Belief in Hell Associated With Low National Crime Rates 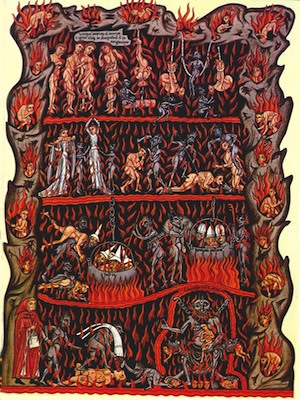 An illustration of hell from the 12th-century encyclopedia Hortus Deliciarum

Religion takes a two-pronged approach to encouraging good behavior: breaking the rules warrants supernatural punishment, while positive actions can earn a blissful afterlife. To most effectively promote a moral lifestyle, however, religious leaders may want to scrap the heavenly reassurance and preach more fire and brimstone: While belief in hell is strongly associated with lower crime rates, belief in heaven is actually tied to more crime. For 67 countries and more than 143,000 participants, psychologists compared three decades of data about belief in heaven, hell, and God to information about the rates of ten different crimes, including homicide and robbery. They found that religious beliefs were better predictors for five of the ten crimes than either poverty or income inequality. The researchers point out that they have not proved that religious beliefs affect crime, only that the two are associated. Nonetheless, they suggest that the fear of supernatural punishment can effectively control groups of people, encouraging social behavior and cooperation. “Unlike humans,” they write in their PLoS ONE paper

, “divine punishers can be omniscient, omnipotent, infallible, and untouchable---and therefore able to effectively deter transgressors who may for whatever reason be undeterred by earthly policing systems.” [via io9