Is Technology Too Good for an Old-School Test of Einstein’s Relativity? 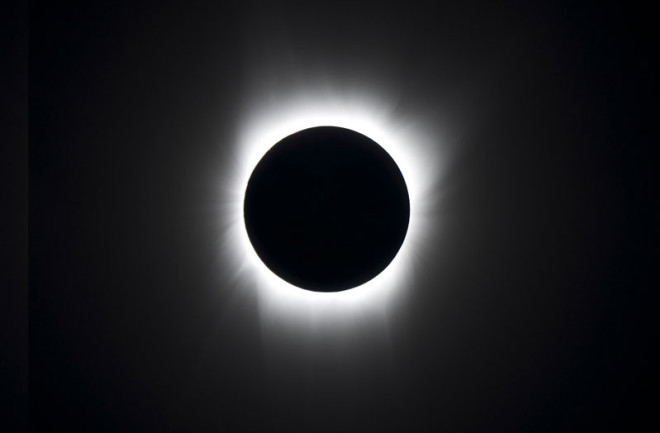 July 11, 2010 eclipse Image as viewed from Easter Island in the South Pacific. (Credits: Williams College Eclipse Expedition - Jay M. Pasachoff, Muzhou Lu, and Craig Malamut) On Aug. 21, sky-gazers from around the world will converge in the United States as a total solar eclipse charts a path from Oregon to South Carolina. In between, on Casper Mountain in Wyoming, you’ll find Don Bruns with his telescope. A retired physicist, Bruns is using the rare opportunity to test Albert Einstein's general relativity like Sir Arthur Eddington, who was the first scientist to test the theory back in 1919. At that time, Newton’s law of universal gravity was still vogue, but Einstein shook the status quo by introducing his theory of general relativity, which fused concepts of time and three-dimensional space into a four-dimensional continuum called space-time. According to Einstein, gravity wasn’t a force; instead, it was a distortion in the fabric of space-time.

His theory was just four years old when Eddington put it to the test during an eclipse in 1919. Both Einstein’s and Newton’s theories indicated that light from distant objects would warp, or bend, as it passed through gravitational fields of massive objects, such as the sun. Einstein’s theory indicated the sun would bend light from a star by a miniscule 1.75 arcseconds—just 0.000486 of a degree—while Newton’s gravity predicated starlight would bend by half that amount. To see who was correct, you’d just need to compare the apparent positions of stars at night to their position during the day, when their light passed through the sun’s gravitational field.

An eclipse was the perfect time to perform such a test. In January of 1919, Eddington photographed the real positions of stars in the Hyades cluster, because light from these stars passes through the sun’s gravitational field. But to perform the second half of the experiment, one needs to photograph the same stars during the day, but in darkness. In May, he photographed the same group during an eclipse, when stars in the Hyades remained visible. By laying an image of real star positions over images of their positions during the eclipse, Eddington could measure the apparent shift caused by the sun’s gravity. When Eddington compared the two images, a shift was clearly visible. And based on his calculations, Eddington concluded that the theory of relativity more accurately predicted the amount light bent than Newton’s.

One of Eddington's photo plates from his 1919 experiment. The shift in starlight is marked with faint lines in the image. (Credit: Wikimedia Commons) Just like when scientists at the Laser Interferometer Gravitational-Wave Observatory confirmed the first detection of a gravitational wave in 2015, Eddington’s discovery was front-page news. He became a star. However, upon further inspection, the results left much to be desired for many scientists. Eddington used silver nitrate photographic plates to capture images of the sky, and the image resolution wasn’t precise. Further, one of the three photographic plates yielded a measurement that would have confirmed Newton's theory of gravity, but it was removed from the experiment due to a "systemic error." Eddington was also a known pacifist and some scientists believed his experiment was wrought with confirmation bias. Following World War I, relations between scientists in Germany and the United Kingdom were frayed to say the least. Some speculated that Eddington, a Briton, disproved compatriot Newton in favor of Einstein, a German, in an act of international scientific diplomacy to cure old wounds. Even Stephen Hawking had doubts about Eddington's results, as he wrote in his Brief History of Time. Still, other physicists argue that if presented with Eddington's data today, many physicists would come to the same conclusion.

Thus, we return to citizen scientist Bruns who, in a sense, will try to vindicate Eddington and prove his findings stand up. But nearly 100 years later, Bruns’ attempt may be foiled by technology that’s actually too good. Modern photography has long since moved beyond plates, but in this case, the march of technological progress doesn’t necessarily yield better results. To get clearer resolution, digital cameras use pixels that are too large, even on a micro level, to catch the apparent position shift that proves relativity. Eddington’s original experiment showed that the sun’s starlight bends apparent position by a mere 1.75 arcseconds. When light falls on the line between two pixels, imaging software nudges it into a neighboring pixel. So if a star’s centroid falls on the line, the picture will reveal variations that are bigger or smaller than what really exists.

Bruns' setup for eclipse day. (Courtesy: Don Bruns) “It’s the most challenging experiment I’ve done in my career,” he says. In 1973, the last time a relativity experiment was conducted during a total solar eclipse, technology "was considered ancient. I mean glass plates, no computers, it’s really a different era. So I thought in 2017...it’d be a piece of cake, not a problem. Well, turns out it’s still pretty tough.” Bruns claims that there’s “no scientific value” to what he’s doing; he says he’s just testing relativity for fun. In February 2016, you’ll remember, scientists announced the first gravitational wave detection, confirming Einstein was correct all along. Still, like the number-hunters who calculate pi to an ever-increasing number of digits, sometimes the act of science is a reward in itself. Alex King, chair of physics and astronomy at Austin Peay State University, would disagree with Bruns. King believes there’s certainly a compelling scientific reason to conduct an old-school experiment. The resolution flaws in Eddington’s photos were reason enough for APSU to seek funding to conduct the same experiment this summer. But APSU’s efforts were blocked by what King calls the politicization of “funding for basic science”—they couldn’t get the money. Fortunately, Bruns has the experience to pull it off on ecplise day. In 1992, Bruns founded a company called Stellar Products that made standard adaptive optics systems. Bruns left Stellar in 2014, but that experience gave him deep knowledge about equipment options that would work well. When he chose the Finger Lakes ML8051 camera, the manufacturer loaned him one for free. He’ll then mount the camera on a TeleVue NP101 telescope to optimize focal ratio. Unfortunately, so long as it relies on pixels to make a picture, there’s going to be some margin of error. After a few trial runs, though, Bruns thinks he’s trimmed the margin to roughly 1 percent. He says other citizen scientists who’ve attempted the experiment only managed to narrow their margins of error to 10 percent. The camera Bruns opted for is monochrome—it shoots in black and white. Digital color photography works like pointillism; instead of painting a solid image, it captures the picture in tiny dots. According to Bruns, when a digital camera shoots in color every other pixel has a different response to light, which affects accuracy. “They used to have these very long, 15-, 20-foot long telescopes operating at a very small focal ratio,” he says, referring to Eddington and other scientists in Einstein’s era. “But now we have a very short compact telescope. It’s only like 2 feet long, but optical distortion is now a problem.” Shorter, modern telescopes correct coma and optical aberrations, but the error they cause in the distortion is bigger than the error from Einstein’s deflections, Bruns says. In other words, no matter what, Bruns is making trade-offs.

In Bruns’ case, one of the largest trade-offs is his time. By the time he spoke with Discover, he’d already spent around 2,000 hours solving for distortion alone. That’s out of nearly 4,000 project hours total, the rest of which he devoted to sorting through star charts for base comparison data, writing software to better process his data and addressing every other part of the experiment that could affect margin of error. He even studied how to minimize the impact of breeze and atmospheric turbulence, which Burns says can spread starlight across three to four pixels. During totality, Bruns plans to take calibration images, something that scientists of yore decided not to do. Ask why and he’ll tell you about Erwin Finlay-Freundlich, a physicist who “was a little frustrated [that] after 3 or 4 eclipses...no one did the experiment quite right.” “You need to take pictures of the stars during the eclipse but you also need to take calibration images during the eclipse,” says Bruns citing Finlay-Freundlich’s method. “And a lot of people of course didn’t want to do that because the eclipses only last 3 to 5 minutes, and the exposures each took a minute or two, so they didn’t want to waste time during totality taking calibration images.” At its point of greatest duration, the 2017 eclipse will last 2 minutes, 40.2 seconds. Fortunately, digital photography can get the required exposure in milliseconds. This means Bruns can test relativity Finlay-Freundlich’s way. And when he does, he says he’ll be the first person in history to do it from the ground. “Just for fun” indeed.