Is Planet Nine still out there?

Researchers debate the existence of a massive planet that could be hiding deep in our solar system. 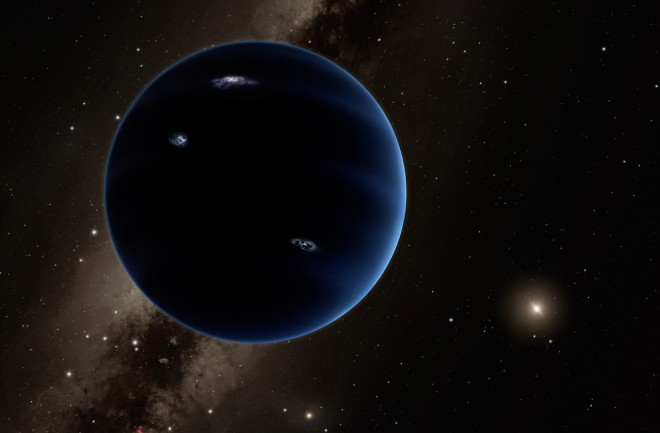 Giant Squid are tough to find because they’re rare and live deep in the ocean. Similarly, if a giant planet lives deep in the solar system, telescopes will have a hard time spotting it. But despite no physical evidence, some scientists still believe such a hypothetical world lurks about 56 billion miles from the sun.

The presence of this world, up to 10 times as massive as Earth and known as “Planet Nine,” would solve the orbital mysteries of other way-out objects. But is this “planet” just a gravitational illusion?

In Science Smackdown, we let experts argue the evidence.

Centered about 3.7 billion miles from the sun, the Kuiper Belt — a doughnut of icy rocks and rocky ice past Neptune’s orbit — serves as a cosmic map boundary. “It’s hard to assess what’s beyond that,” says astronomer Scott Sheppard of the Carnegie Institution for Science. There’s just too little sunlight at such distances. “Even big things are very faint.”

Sheppard wants to find those faint things anyway. In 2012, his team used a new, car-sized camera to discover a dwarf planet nicknamed Biden. It seemed to have an oddly stretched-out orbit, suspiciously similar to the only other known dwarf planet in the area, called Sedna.

In 2014, Sheppard’s team proposed an explanation: A super-Earth-sized planet might have, ahem, shepherded the dwarfs into their unusual orbits around the sun with its gravitational crook. More evidence for this idea came last year, when Sheppard published the similarly tricky orbit of the Goblin, another dwarf planet discovered around Halloween 2015.

“I think the planet is more likely real than not,” Sheppard says. “But it’s definitely not a slam dunk.”

Ann-Marie Madigan, an astrophysicist at the University of Colorado Boulder, didn’t even set out to study the solar system. She focused on far-out stars and how they move around the supermassive black holes frequently found at the centers of galaxies. Over time, she realized that although they were individually small, together these stars could flex some serious gravitational muscle. Their influence on each other could skew their orbits, tilting them in the same direction.

Graduate student Alexander Zderic worked with Madigan over the last couple of years to take this galactic model of “collective gravity” down to a smaller scale: the solar system. Here, he says, dwarf planets like Biden, Sedna and the Goblin could end up with similar orbits because a bunch of smaller objects — which would collectively weigh about the same as the hypothetical Planet Nine — did the gravitational shepherding instead. To find out if they’re right, and potentially convince the Planet Nine enthusiasts, Zderic’s team will have to spot more of the hard-to-find objects.

During the current stalemate, at least both groups of researchers can agree on one thing: Determining how distant objects tug on one another is complicated. As Zderic puts it, “Gravity is one of the more mysterious physical forces.”

[This story originally appeared in print as "A Whole New World?"]